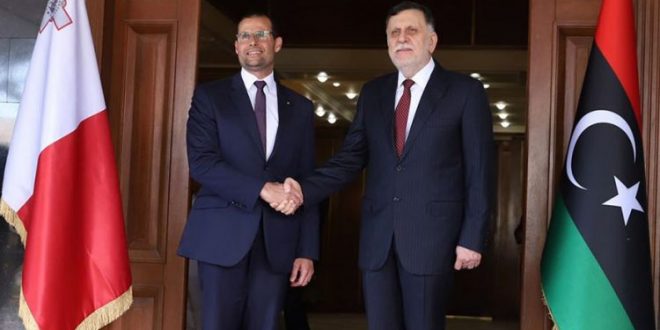 Libya signed a memorandum of understanding with Malta on Thursday for combating illegal migration and consolidating bilateral relations.

The signing came during a visit by Maltese Prime Minister Robert Abela to Tripoli in which he discussed illegal migration with his Libyan counterpart Fayez Al-Sarraj.

Al-Sarraj praised bilateral relations between the two friendly countries and Malta’s support to the Libyan Government of National Accord.

He also touched stressed the need to end the aggressive offensive by warlord Khalifa Haftar and his forces.

Meanwhile, Abela extended support to the Libyan Government of National Accord, adding that conflict should be resolved through dialogue.

International Relations and CooperationTrafficking and Migration
All
2020-05-28
asaeid
Previous Libya announces 22 new Coronavirus cases and another death
Next Libya has lost nearly 5 billion dollars due to oil blockade, NOC says