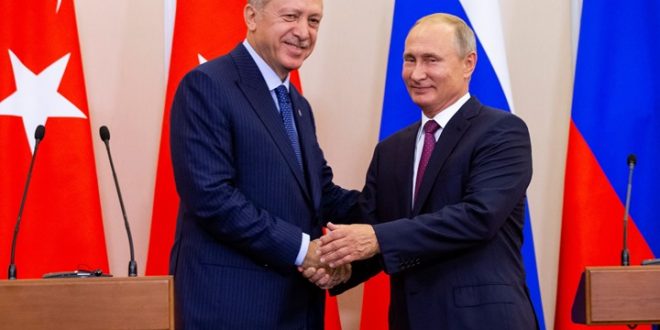 Russian and Turkish involvement connects the crises in Syria and Libya

There have been frequent reports that Russia has transferred a fleet of MiG-29s and two Sukhoi 24s from Hmeimim on the Syrian coast to Al-Jafra in central Libya to support the forces of Field Marshal Khalifa Haftar as he tries to take control of Tripoli. If such reports are accurate, then this means that the proxy war fought by Russia and Turkey in Syria has been extended to Libya.

This scenario started to take shape last year, when it became obvious that, in America’s absence, Moscow’s ambition was to increase its influence in the Mediterranean basin, having established itself in Syria. The same applies to Turkey, which has taken a more aggressive approach to protecting its regional interests, especially after President Recep Tayyip Erdogan succeeded in controlling the army after the failed 2016 coup attempt.

Russia and Turkey want to defend their interests in Libya, the importance of which has become clear to them as the regional and international battle for control of the country intensifies. They both had major economic interests in Libya before the February 2011 revolution, which is why they opposed the NATO air strikes to topple the regime of the late Muammar Gaddafi.

The Russians had major arms contracts with Gaddafi and Turkish companies had contracts and investments worth $15 billion, specifically in the Libyan construction sector, although Ankara changed its position later. These interests are more important than ever, especially for Russia, as control of a government in Libya would provide a strategic foothold for Moscow on southern Europe’s doorstep. It would also give Russia a toehold in Africa, where China and the US are both active in competition for influence; France too, albeit to a lesser extent.

The battle of Libya has become a symbol of Turkey’s rise as a major regional power. It has also opened the door for Ankara to redraw the boundaries regarding influence and control of energy resources in the eastern Mediterranean. Its 2019 agreement with the Government of National Accord (GNA) in Tripoli to demarcate maritime borders gave it additional access to around 100,000 square kilometres of the Mediterranean. It also placed an obstacle in the way of the pipeline proposed by Israel, Cyprus and Greece to pump oil to Europe.

Given the magnitude of these interests, it is expected that Turkish and Russian involvement in the Libyan war will increase to the level of their involvement in Syria. The battlefields in Libya and Syria bear remarkable similarities, not least the participation of Syrian mercenaries on both sides. To this consideration should be added the fact that the GNA’s rival government in eastern Libya loyal to Haftar has decided to reopen the Libyan Embassy in Damascus.

It is now believed that any escalation in the field in Libya will be reflected in the Russian-Turkish understandings in Syria. This is especially so after Turkish drones were responsible for destroying Russian-made Pantsir-S1 air defence systems in Al-Watiya Air Base, which helped forces loyal to the GNA to regain control of the strategically important site.

The reverse is also possible: the Syrian scenario could be repeated in Libya, with Russia and Turkey succeeding in marginalising other foreign parties involved in the conflict, and monopolising military and political decisions. This would enable them to reach a Libyan version of the Astana agreements covering Syria.

This is certainly not the ideal scenario, as the Arabs are more deserving of playing this role, but in light of the experiences that preceded and followed the Arab Spring revolutions, it is clear that the Arab absence is not necessarily a bad thing. Generally-speaking, in the eyes of the Arabs, politics takes on a very personal nature, especially in domestic issues, which tend to be based on bickering, spite and putting others down, even from among their own people.

This is why the logic of agreements is foreign to them; their approach tends to be “all or nothing”. If this was not the case, we would arguably not have reached the situation that we are witnessing in Syria and Iraq, and the fruitless wars in Libya and Yemen would have ended a long time ago. Moreover, it would not have been necessary for the international community to urge us to stop the fighting, even temporarily, in order to tackle the coronavirus pandemic threatening us all.

International Relations and CooperationSecurity Situation
All
2020-05-28
asaeid
Previous Libya has lost nearly 5 billion dollars due to oil blockade, NOC says
Next As Hifter loses ground in Libya, Egypt weighs options to support him