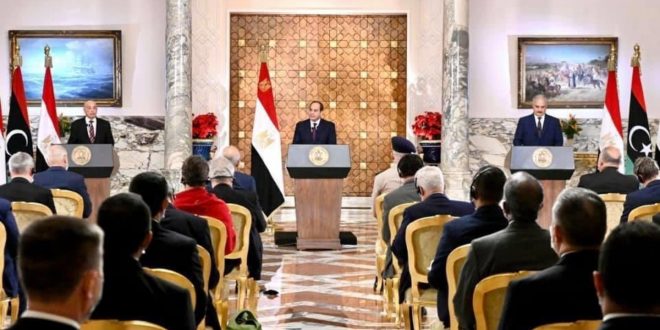 At a Cairo press conference yesterday led by Egypt President Sissi, Libya’s House of Representatives (HoR) head Ageela Saleh, and Libyan National Army (LNA) commander, Khalifa Hafter, launched a peace initiative for Libya. Much of the initiative is the recycling of what has passed before, including Saleh’s April eight-point initiative.

The initiative can be viewed on several levels. It was an attempt by Cairo to keep their allies, Saleh and Hafter, united after their apparent fallout on 8 April – when they had announced conflicting initiatives on the same day. Hafter’s announcement had been interpreted as a coup.

It can also be interpreted as an attempt by Cairo to save its face and the face of its two allies in view of their military setbacks.

On the immediate and practical level, the initiative calls for a ceasefire by 06.00 hours, Monday 8 June.

However, the initiative is at odds with the military reality on the ground, with Tripoli sprinting from April to the first week of June from the coastal towns of Surman and Sabrata – to the outskirts of Sirte.

The question must then be asked: Why didn’t Saleh, Hafter and their foreign backers accept a ceasefire when they were at the gates of Tripoli? Emboldened by Turkish support and having gained momentum and found themselves on the front foot, why should the Tripoli-aligned forces accept a ceasefire now? What is their incentive to do so? In view of all the damage Hafter’s campaign has caused to western Libya, why not attempt to capture Sirte, Jufra airbase and the eastern oilfields and eradicate Hafter as a power altogether?

Much will depend on what the international backers of the two sides want to do in this proxy war. Will Russia and Egypt put up resistance to Turkey’s decisive aircover to enable Hafter some resistance at Sirt, Jufra or the eastern oilfields? Or have they given up on Hafter or made a separate deal – making Hafter dispensable?

Although at the time of publication there has been no official response from the Serraj government nor from UNSMIL, Tripoli critics have already dismissed the proposal as a rehash of old proposals.

The fact that the proposal puts Hafter and his LNA at its centre is very likely going to receive a total rejection by the powers in Tripoli and more importantly its aligned powerful western Libya militias.

The Cairo initiative says foreign mercenaries must be removed from Libya, militias must be dismantled, and their weapons handed over so that the LNA, in cooperation with the security services, can carry out their military and security tasks in the country.

The initiative also goes on to say that ‘‘To regain the State’s control over all security institutions and support the military institution (the LNA) to assume its responsibilities in combating terrorism and asserting its role in cooperation with the security and police agencies to protect Libyan sovereignty and restore maritime, air, and land security. This again puts Hafter’s LNA at the heart of the new security institutions.

Politically, the Cairo initiative again recycles the proposal to regionally elect a new three-person Presidency Council which will nominate an external prime minister – subject to HoR approval. All top positions and ministries shall be shared out regionally and the HoR shall amend the currently operating 2011 Temporary Constitutional Declaration after electoral assemblies for each region form a committee to draft a new constitution.

Under this initiative, Libya will endure yet another ‘‘transitional period’’ of weak government which will take the country to beyond 10 years since Qaddafi was toppled – of initially 18 months, and which can be increased by a maximum of 6 months,

During this period, all Libyan state institutions, especially the main economic institutions, notably the Central Bank of Libya, National Oil Corporation, and Libyan Investment Authority – shall be restructured and their boards reshuffled.

All economic and monetary institutions in eastern, southern, and western Libya are to be unified to implement structural economic reforms and prevent Libyan funds from reaching any militias, and ensure a fair and transparent distribution of Libyan resources to all citizens.

Here is the full text of the Cairo initiative: