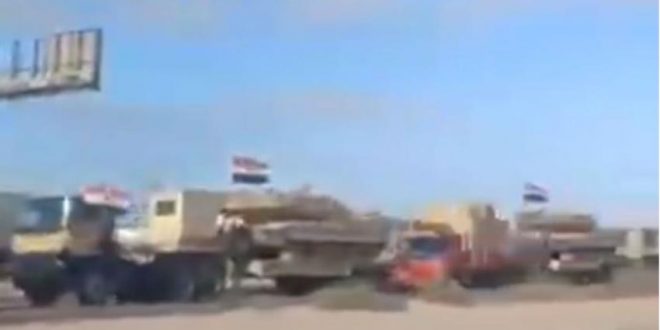 A large convoy of Egyptian military hardware -including tanks and attack helicopters – has reportedly crossed the Libyan border, only two days after Egyptian President Abdel Fattah al-Sisi unveiled a ceasefire proposal to end fighting in the country.

The so-called “Cairo Declaration” called for the withdrawal of “foreign mercenaries” from all Libyan territory, and was unveiled by Sisi while flanked by Libyan militia leader Khalifa Haftar and eastern parliament speaker Aguila Saleh.

It also called for the “dismantling of militias and handing over their weaponry” and came following a series of military victories by the country’s UN-recognised Government of National Accord (GNA) over Haftar’s Egypt and UAE-backed militia forces.

The plan was swiftly rejected by the GNA who on Sunday bombarded Sirte, the last major settlement before the traditional boundary between western and eastern east begins.

The battle to retake Sirte, the key gateway to the country’s major oil fields in the east, follows the recapture of all remaining outposts of western Libya from pro-Haftar militias.

It marks 14-months since Haftar – whose stronghold is in the east – began his failed offensive to gain control of the capital.

Despite calls for “peace” on Sunday, Egyptian flags were seen hoisted on a large column of military equipment on the move close to the border with Libya.

The convoy reportedly included 18 US-made M1A2 Abrams battle tanks, according to local journalists, amid reports of a build of Egyptian Mi-24 attack helicopters in the same area.

Egypt has provided “everything from Cold War-era tanks, fighter jets, helicopters, and assorted ammunition…from their own reserves and in contravention of a UN arms embargo on the country,” the expert said.

According to analysts, the ultimate concern for Sisi is to secure the long western border with Libya, evinced by the Sunday build-up of military hardware in the area.

Libya has been a chaotic battleground of rival administrations, militias and jihadi groups ever since the 2011 downfall and killing of brutal dictator Muammar Gaddafi.

But as Haftar’s fortunes dwindle, analysts believe that Cairo might attempt to save its sphere of influence in eastern Libya by investing in political alternatives, such as parliamentary speaker Aguila Saleh who is at reportedly at loggerheads with Haftar.

According to Jalel Harchaoui of the Hague-based Clingendael Institute, Egypt could pursue the path of direct military engagement if the conflict worsens, such as in the form of air strikes, a tactic it used against the Islamic State Group in the eastern Libyan city of Derna in 2015.

Egypt is part of a coalition of states which continue to support Haftar, including Russia, the UAE, Saudi Arabia and other countries.

In recent months, Turkey has stepped up its support for the UN-recognised Tripoli based goverment – which Haftar is trying to overthrow – sending military advisers, weaponised drones and reportedly also Syrian mercenaries, to tip the battlefield balance in the GNA.

The latest key chapter in the Libya conflict, Haftar’s offensive on Tripoli, which began in April 2019, has resulted in hundreds of deaths – many of them civilians – and driven more than 200,000 people from their homes.

International Relations and CooperationSecurity Situation
All
2020-06-08
asaeid
Previous Bashaga: We will liberate Libya thoroughly and prevent Russia from establishing a military base
Next Libya’s GNA accuse UAE of launching air strike on field hospital