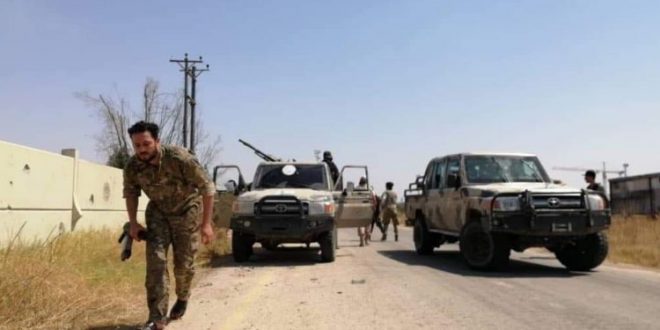 The recent gains by Libya’s Tripoli-based government over forces loyal to renegade commander Khalifa Haftar may threaten Israeli interests in the region, a report by a Tel Aviv-based research institute has said.

The Institute for National Security Studies (INSS) said on Monday that while the conflict in Libya may not directly impact Israel, if the Turkish-backed Government of National Accord (GNA) strengthens its grip on power, it could weaken a bloc of countries that support Israel’s activities in the Eastern Mediterranean.

“Turkey will exert significant influence in the North African country, enabling Ankara to project power across the Eastern Mediterranean region and further challenge Israeli interests in the region, along with those of Israel’s Egyptian, Cypriot, and Greek partners,” the report said.

Last week, the foreign ministries of Cyprus, Egypt, France, Greece and the United Arab Emirates (UAE) signed a statement condemning Turkey for its “illegal activities” in the region. Israel did not sign on to the statement.

The INSS said that Israel’s “silence” suggested that it was unsure over whether to actively engage in Libya at the risk of exacerbating an already tense relationship with Ankara.

Libya has been wracked by conflict since 2015, with the country split between rival administrations in the east and the west, each backed by armed groups supported by foreign governments.

Last April, Haftar – who is backed by Egypt, the UAE and Russian mercenaries – launched an offensive on the Libyan capital Tripoli.

Since Turkey deployed its military and thousands of Syrian fighters to Libya earlier this year, Haftar’s forces have lost crucial ground to the GNA, with the internationally recognised government capturing the strategic al-Watiya airbase and pushing Haftar’s forces back from areas near the capital.

The report said that Israel needed to prepare for Turkey and Russia both expanding their influence in the region and lamented “Washington’s continued reluctance to assume a more active diplomatic or military role.”

The recent bombings on Libya’s al-Jufra air base by Russian warplanes was met with a rare rebuke by the US Africa Command (US AFRICOM), with Washington simply saying it might deploy a small brigade to Tunisia as a result.

Turkey’s activities in the Mediterranean

Monday’s report attributed gains by the GNA to Turkey’s military intervention, saying it had cemented Ankara’s role as an arbiter in the conflict.

The successes had also allowed Turkey to gain new ground in its operations in the Mediterranean sea, where Ankara has begun a number of resource excavation projects.

Last year, Turkey and the GNA signed a memorandum of understanding to delimit maritime zones in the Eastern Mediterranean in an attempt to block further Greek and Cypriot energy drilling activities in the area.

These projects have been met with condemnation by some countries, including Greece, France, and the UAE.

“[Turkey’s] relationship with the GNA, and the maritime delimitation agreement in particular, will obstruct plans to build the EastMed pipeline, which was slated to export natural gas from Israel through Cyprus and Greece and on to Europe.

“Had Haftar, with the support of the UAE and Egypt, managed to take Tripoli, the achievement would have marked a major victory for countries staunchly opposed to Turkey. In this respect, Ankara does not need a full reversal of Haftar’s military achievements – even a partial halt to his designs fulfils its goals.”

Turkey’s energy minister, Fatih Donmez, has said the country may start oil exploration in the Eastern Mediterranean in three or four months, following the framework of a Libya agreement.

An Israeli source previously told Middle East Eye that the governments of Israel and Turkey were looking to re-establish diplomatic ties and appoint ambassadors between the two countries.

The source said that the two countries share similar interests, including natural gas supplies in the Eastern Mediterranean.

“Given that Israel’s ties with Turkey have been highly problematic and relations with Russia remain delicate,” Israel must prepare for the possibility that both Ankara and Moscow will carve greater influence in the Mediterranean, the report said.