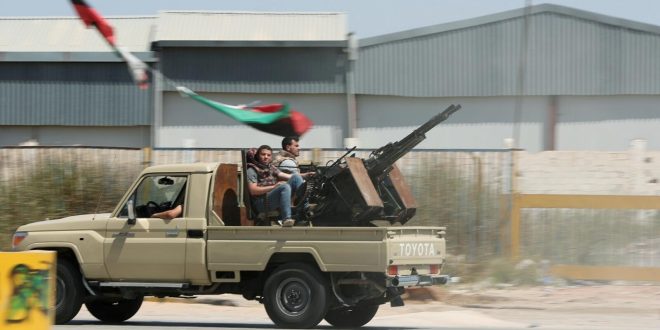 Libyan fighters allied with the country’s internationally recognised government pressed their advance into the strategic city of Sirte, boosted by recent battlefield gains and a withdrawal by forces of renegade military commander Khalifa Haftar from around the capital, Tripoli.

The push on Monday came despite a unilateral cease-fire proposal over the weekend by Egypt, a backer of the self-declared Libyan National Army (LNA) commanded by Khalifa Hifter, who has waged a year-long campaign trying to capture the capital.

Interior Minister Fathi Bashagha of the internationally recognised Government of National Accord (GNA) said the government side would engage in political talks only after taking Sirte and also the inland Jufra airbase, to the south.

GNA Prime Minister Fayez Al-Sarraj urged his troops to “continue their path” towards Sirte, according to a statement posted by Mohamed Gnunu, a spokesman for the Tripoli-allied forces. Gnunu posted footage of allegedly captured tanks and vehicles in the outskirts of Sirte.

Haftar’s military media unit, however, said his forces destroyed a military company that included Turkish-made Hausers and tanks, along with a bus allegedly carrying Turkish troops and Syrian mercenaries who have been aiding the Tripoli militias.

Two Sirte residents said shelling by Tripoli militias on Monday killed at least eight civilians and wounded six others in the town of Thalatheen, 30km (18 miles) west of Sirte. The residents spoke condition of anonymity because of fear of reprisals. There was no immediate comment from the Tripoli militias.

The Libyan Red Crescent in Sirte said the dead included a family of seven people.

A unilateral ceasefire proposal over the weekend by Egypt – a backer of the Libyan forces commanded by Haftar, who has waged a year-long campaign to capture Tripoli – was rejected by the GNA.

Backed by Turkey, the GNA’s forces gained the upper hand last week after retaking the capital’s airport, all main entrance and exit points to the city, and a string of key towns, forcing Hafter’s fighters to withdraw – defeats their command painted as a tactical measure to give the UN-backed peace process a chance.

On Monday, Haftar’s forces continued to lose ground to the GNA, which has been pushing towards Sirte.

“I’ve been speaking to [GNA] military leaders here on the ground and they’ve told me that yesterday they made significant gains,” Al Jazeera’s Malik Traina, reporting from Abu Grein, 140km (87 miles) west of Sirte, said.

“They have entered the western gates of Sirte … and are in control of this area. They have also entered Wadi al-Jarf, which is in the south of Sirte,” he said.

“From what our sources tell us, many forces loyal to Haftar have withdrawn to eastern Libya, but there is a force that remains in Sirte. And whether or not they will continue the battle we will have to find out.”

The Mediterranean coastal city of Sirte is a key gateway to the country’s major oilfields in the east, still held by Haftar’s forces.

Taking Sirte would open the way for the Tripoli-allied fighters to press even farther eastward and potentially seize control of vital oil installations, terminals and oil fields that tribes allied with Haftar shut down earlier this year, cutting off Libya’s major source of income.

On Saturday, Egyptian President Abdel-Fattah el-Sisi proposed a ceasefire starting from Monday, which was accepted by Haftar and Aguila Saleh, speaker of a rival parliament based in the eastern city of Tobruk, but turned down by the GNA.

UAE’s Minister of State for Foreign Affairs Anwar Gargash tweeted on Monday the initiative “strengthens the Arab and international momentum for an immediate ceasefire, the withdrawal of foreign troops, and the return to a political track”.

Libya’s eastern-based forces are backed by the United Arab Emirates and Egypt, as well as France and Russia.

But recently, Saleh was quoted as saying Russia wants negotiations to resume with the Tripoli government, because it no longer sees a positive outcome to Haftar’s offensive.

Al Jazeera’s Mahmoud Abdelwahed, reporting from Tripoli, said: “This potential meeting in Moscow has not been announced yet either by Russia or Tripoli, which indicates the GNA here in Tripoli is not keen to let its local allies know it is engaging in talks again with the rival administration in the east.”

Sami Hamdi, editor-in-chief of The International Interest, a London-based risk consultancy group, said Russia is trying to push for a political settlement that includes all warring factions.

“I think Russia is trying to lessen Haftar’s power, but not entirely get rid of him,” he told Al Jazeera.

“Al-Sarraj is in an awkward position; if he seems to be excited about the talks then he will lose domestically but if he doesn’t go to these talks then he risks losing the Turkish support and the general leadership of the GNA.”

Haftar – a 76-year-old former Gaddafi loyalist turned defector who spent years living in the United States – has vowed to rule all of Libya.

Tarek Megerisi, a fellow at the European Council on Foreign Relations, said Egypt was upset by Haftar’s “reckless adventurism”.

“Egypt has direct security interests in Libya and having a security partner to work with in eastern Libya is of paramount importance to them, which is why they were so concerned,” he said.

However, Egypt is still “invested in propagating the Haftar project diplomatically, providing him political support and militarily supporting his war effort”, said Megerisi.

But at the same time Egypt is “looking for other options and ways to secure their interests as they become less and less certain that he [Haftar] will win”, he added.

While Egypt will likely invest further in protecting its interests in the east, it has no appetite for direct confrontation with the GNA’s main backer, Turkey, analysts say.

“Egypt’s interests in Libya and the Mediterranean sea are primarily represented in the security of their western border and economic exclusive zone sovereignty,” said Jalel Harchaoui of the Hague-based Clingendael Institute.

“Turkey … will likely respect Egypt’s security and economic interests in order to avoid any form of direct confrontation.”

Security ForcesSecurity Situation
AllSirte
2020-06-09
asaeid
Previous UNSMIL welcomes calls for political talks, called for ceasefire, respect of arms embargo
Next UN: We are prepared to assist in an investigation into the dead bodies found at Tarhuna Hospital