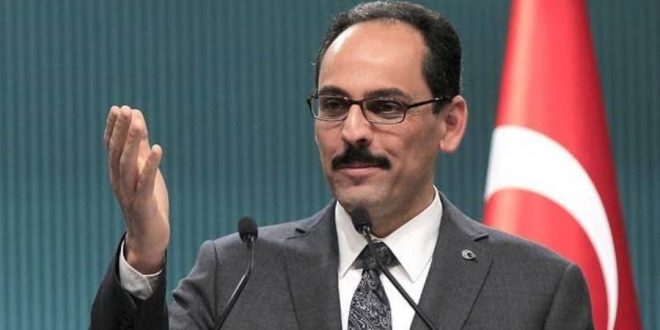 Kalın told CNN Turk TV Channel that Turkey had urged the US, which was reluctant to play a “decisive role” in Libya, to take a more active role in the country.

He also said that France had sent last week a delegation to the Libyan capital Tripoli and they carried out thorough discussions.

Kalın added that “putschist Haftar” is eying control over Libya’s resources, saying that any newly-created security vacuum in the region could endanger the security of North Africa, Mediterranean and NATO.

“We assure our European partners, the US and Russia that Ankara stands with ceasefire efforts to pave the way for a political process in Libya.” The presidential spokesman said.

He added that the ceasefire shouldn’t be used by Haftar to buy more time for his endeavors, indicating that practical steps for political solutions should be be put in place.

International Relations and CooperationSecurity ForcesSecurity Situation
Sirte
2020-06-25
asaeid
Previous UN: 28,000 Libyans displaced from Tarhuna and Sirte
Next US Libya aim is to reduce arms flow from Turks, Russians and anyone: Pompeo