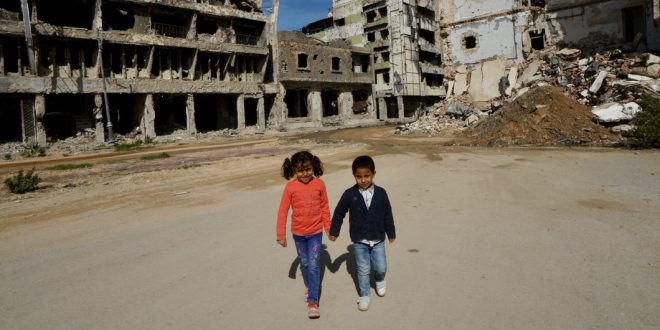 Some 28,000 Libyans have been displaced from the cities of Tarhuna and Sirte since 4 June, the UN revealed on Tuesday.

This comes as the country has witnessed increased unrest as the internationally-backed Government of National Accord (GNA) increased its campaign to push back advances made by renegade General Khalifa Haftar’s forces.

A spokesman for the United Nations Secretary-General, Stephane Dujarric, said in a statement that more than 3,800 people fled their homes due to violent clashes taking place in the vicinity of Tarhuna and Sirte, bringing the number of displaced people in the region, since 4 June, to more than 27,750.

On 5 June, the Libyan army liberated Tarhuna from Haftar’s militia and is currently preparing to recapture Sirte, Haftar’s stronghold.

Dujarric stressed that “the United Nations and humanitarian partners continue to respond to those affected, reaching more than 18,000 people in the past two weeks.”

He added: “Humanitarian aid has arrived in Sirte, and further aid is being planned for the displacement destinations that have not yet been reached.”

The United Nations Human Rights Council (UNHRC) decided on Monday to establish an international fact-finding mission into human rights violations in Libya since 2016.

Prior to this decision, Tripoli had repeatedly asked for the United Nations’ assistance to launch an investigation into the discovery of mass graves and land mines discovered in areas previously controlled by Haftar’s militia.