Home / Normal / US Libya aim is to reduce arms flow from Turks, Russians and anyone: Pompeo 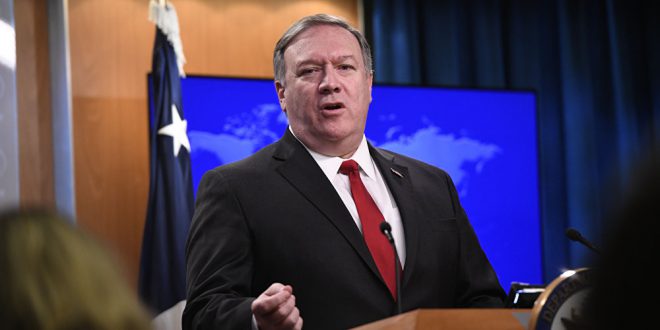 US Libya aim is to reduce arms flow from Turks, Russians and anyone: Pompeo

Speaking at a press briefing in Washington DC yesterday and in answer to the question: ‘‘On Libya, are you willing to (inaudible?) – for a regional conflict in Libya between Turkey and Egypt specifically?’’, U.S. Secretary of State Pompeo said:

“We have worked closely with our European partners to try and get these talks restarted. I was in Berlin now several months back. The mission set remains the same: to get the fighting to stop; to reduce the number of arms flowing there from any place, whether that’s from the Turks, from the Russians, from anyone; to reduce the footprint of the military conflict; and then to find a political solution to resolve, to get a stable, peaceful situation in Tripoli and in Libya more broadly.

We’re still hopeful that we can get all of those who have an interest there to the table to have these discussions and come to a political resolution.”

The media question directed at Pompeo refers to the fact that Turkey is militarily backing Libya’s internationally recognized government in Tripoli while Egypt (and Russia, UAE and France) is backing Tripoli’s eastern-based opponent, Khalifa Hafter.

After 14 months of being camped on the outskirts of Tripoli, and with increased Turkish military help, Hafter’s forces were forced out of all of western Libya earlier in June. Today, the new battle line is just west of the central Libyan city of Sirte.

Emboldened by their military success, Tripoli wants to continue to push Hafter out of Sirte, the strategically important Jufra airbase and out of the financially imperative eastern crescent oilfields that produce two-thirds of Libya oil. They may even have designs of pushing beyond the oilfields deep into eastern Libya.

However, Egypt, which shares a 1000 km-plus border with Libya, has warned that Sirte and Jufra are a ‘red line’ and that Turkey should not support Tripoli’s forces further east. It has threatened direct and overt (as opposed to its previously covert) military intervention as it cites security interests.

Both Turkey and Tripoli have rejected Egypt’s ‘red line’ concept. Turkey views its military intervention as legal and legitimate – at the invitation of the internationally recognized government in Tripoli.

Egypt says the internationally recognized Libyan parliament in Tobruk (the House of Representatives – HoR) has not endorsed the Tripoli government and therefore it has no legitimacy to invite foreign intervention.

On another note, it will be recalled that in a webinar organized yesterday by Rome 2020 Med Dialogues / ISPI, former UNSMIL head Ghassan Salame blamed the international community for the failure to find a solution in Libya.

He said that the big powers were divided. The US had ceased playing the role of the international Sherriff, the UN was divided, and the Europeans were not serious enough. He said that the US overconcentrated on fighting terrorism in isolation from the wider contexts which took away from other issues and conflicts, whilst Europe was obsessed with fighting illegal migration.