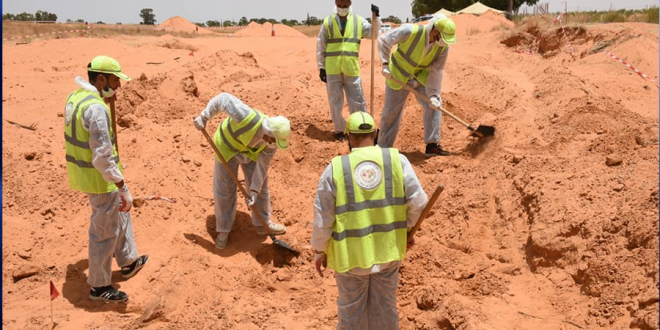 Nine bodies have been found in another mass grave in the Libyan town of Tarhouna after fighters loyal to eastern strongman Khalifa Haftar withdrew, pro-government forces said on Monday.

Tarhouna, southeast of Tripoli, served as the main staging point for Haftar‘s abortive offensive aimed at seizing the capital from the UN-recognised Government of National Accord (GNA).

“Nine bodies were discovered and exhumed on Sunday… at a site suspected of containing mass graves, in the town of Tarhouna,” said a statement posted on Facebook by pro-GNA forces.

Government forces earlier this month said they had discovered eight other suspected mass graves, most of them in and around Tarhouna, with the United Nations voicing “horror” at the reports.

The 14 months of fighting for the capital left hundreds dead and forced some 200,000 people to flee their homes.

On June 22 the UN’s top rights body ordered a fact-finding mission to Libya to document violations committed since 2016, while an International Criminal Court prosecutor said mass graves discovered there may constitute evidence of war crimes.

Oil-rich Libya has been torn by conflict since the 2011 toppling and killing of dictator Muammar Gaddafi in a NATO-backed uprising.