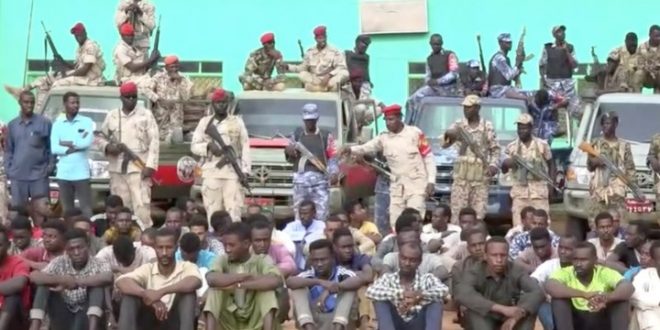 The presence of Sudanese militias in Libya is destabilising for Sudan

There have been some dramatic changes in Sudan since President Omar Al-Bashir was overthrown in April last year. The former dictator of thirty years is now in prison. A transitional government made up of civilian and military members is in charge, and it has enacted some important reforms.

However, more than a year later, many things remain the same, not least the country’s proclivity for hiring out its soldiers as mercenaries. Under Al-Bashir, thousands of Sudanese troops and paramilitaries were deployed in Yemen to fight on the side of the Saudi-led coalition. This deployment has been scaled back following his ouster. Nevertheless, thousands more soldiers were sent to Libya during the same period, and there they remain.

One of the first signs of this shift came as early as June 2019 when Libya’s UN-backed government captured 120 soldiers during an offensive and found half of them to be either Sudanese or Chadians. The following month, Sudan’s notorious Rapid Support Forces (RSF) deployed 1,000 troops to Libya, according to a UN panel of experts. By the end of the year, sources in Libya claimed that there were at least 3,000 Sudanese troops in the country. One commander told the Guardian that “We do not even have the capacity to accommodate these big numbers.” This pattern continued into 2020. In January, a group of Sudanese men hired as guards by a UAE-based company were reportedly transferred without their consent to protect oil facilities in Libya.

The Sudanese mercenaries in Libya are understood to be fighting on the side of warlord Khalifa Haftar, who is trying to topple the internationally-recognised Government of National Accord. Haftar’s most important international supporter is the UAE, which has close ties to the influential Mohamed Hamdan Dagalo (aka Hemetti), commander of the RSF and Deputy Chairman of Sudan’s Sovereignty Council. Hemetti reportedly agreed to provide Sudanese military support for Haftar in exchange for funding.

The presence of Sudanese fighters not only adds another dangerous element to Libya’s civil war, but also has wide-ranging and destabilising repercussions in Sudan itself. Barely one year into its fragile transition the government in Khartoum is already deeply divided between its civilian and military members. Hemetti is regarded widely as Sudan’s de facto ruler due to his vast political influence, extensive business interests and command of the RSF. Many insiders believe that the military leader has been busy undermining the administration of civilian Prime Minister Abdalla Hamdok.

The issue of Sudanese mercenaries provides an additional source of tension. Although it may be difficult for Hemetti to justify RSF troops fighting in Libya, it is risky for Hamdok to challenge his powerful colleague on the matter.

This divergence is not just a question of principle. The presence of Sudanese fighters in Libya threatens to subvert Hamdok’s whole governing strategy. Since assuming office in August 2019, the Prime Minister has made the re-establishment of frayed international relationships a priority.

Under Al-Bashir, Sudan had become a pariah state. Several Western countries imposed sanctions on his regime, while the US has kept Sudan on its list of “state sponsors of terrorism” since the 1990s. This designation prevents Khartoum from accessing loans and debt relief from international institutions such as the International Monetary Fund and World Bank.

One of Hamdok’s primary concerns on taking office, therefore, was to normalise relations with the US. He visited Washington DC last August and promised to reduce Sudan’s role in regional conflicts. Over the following months, the government recalled around 10,000 troops from Yemen, leaving just a few hundred behind. In April this year, Sudan agreed to pay $30 million in compensation to the families of 17 US Navy sailors killed in the bombing of the USS Cole in Yemen in 2000.

These efforts have been aimed at persuading the US to drop Sudan’s terrorism listing. However, the presence of Sudanese troops in Libya undermines such efforts.

Sudan’s entanglement in Libya also presents the danger of conflict spilling over into Darfur. Almost all of the major rebel groups in this western region of Sudan are currently operating in Libya. In addition to acting as mercenaries, they are reportedly enriching themselves through people trafficking, illegal trade and extortion. Some say that they are preparing themselves militarily for future clashes with Sudanese security forces back in Darfur.

RSF fighters in Libya could also return to Darfur emboldened. This military unit grew out of – and is composed primarily of – the Janjaweed militias which are accused of committing genocide in Darfur. The soldiers who returned from Yemen reportedly fuelled tensions in the region, and residents claim that the RSF has continued to commit war crimes against them.

There is also the possibility that the RSF and Darfuri rebels will fight among themselves while deployed in Libya. Although both are on the side of Haftar’s forces, given the bad blood between them the predictions are that they will clash. If such a scenario materialises, it will undoubtedly complicate Khartoum’s fragile peace negotiations with Darfur’s armed movements.