Home / Normal / Al-Sarraj to Le Drian: There are now maneuvers not initiatives aimed at solutions to Libya’s conflict 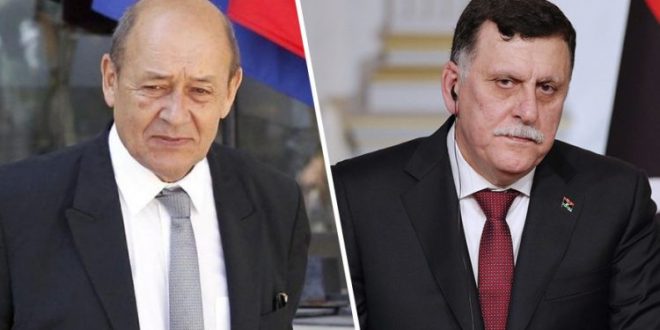 Al-Sarraj to Le Drian: There are now maneuvers not initiatives aimed at solutions to Libya’s conflict

The French Foreign Minister Jean-Yves le Drian has expressed concerns about the tensions in Libya, calling for ceasefire so that Libyans can resume the political process under the auspices of the UN.

These remarks came in a phone conversation between le Drian and the Head of the Presidential Council Fayez Al-Sarraj on Thursday.

Al-Sarraj told the French Foreign Minister that what is happening now isn’t a geoup of political initiatives to find solutions for the Libyan crisis but a group of maneuvers to give new roles to certain figures.

Al-Sarraj spoke with le Drian about the mass graves unearthed by GNA forces in Tarhouna, planting of mines and other atrocities discovered in the areas where Haftar’s forces were positioned, in addition to the efforts to reopen oil production, according to Al-Sarraj’s media office.

“Italy and France agree on the need for a ceasefire and Paris totally rejects all types and sources of external interventions in Libya.” The French Foreign Minister explained.

“Oil blockades must end. They are depriving Libyans of their main source of income as Libya has lost over the years over quarter of a trillion dollars due to the such reckless acts.” Al-Sarraj explained.