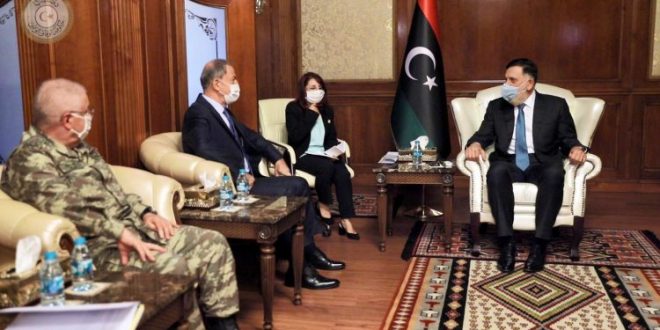 Turkey‘s defence minister and military chief visited war-torn Libya‘s capital on Friday, the country’s UN-recognised government said, the second visit in weeks by a minister from its main international backer.Defence Minister Hulusi Akar and Chief of General Staff Yasar Guler discussed “military and security cooperation” with the head of the Government of National Accord Fayez al-Sarraj and military officials, the GNA said.

The visit comes a month after GNA forces declared they were back in full control of Tripoli and its suburbs following a year-long offensive by eastern military rogue general Khalifa Haftar to seize the capital.

While the GNA has received extensive military backing from Ankara and is also supported by Qatar, Haftar is backed by Russia, the United Arab Emirates and Libya’s eastern neighbour Egypt.

Friday’s talks covered defence and security training programmes under a deal signed by Tripoli and Ankara in November last year, a statement said.

Libya has been torn apart by bloodshed since the NATO-backed uprising which toppled the regime of longtime dictator Muammar Gaddafi, with two rival administrations now vying for power and control of the country’s vast oil wealth.