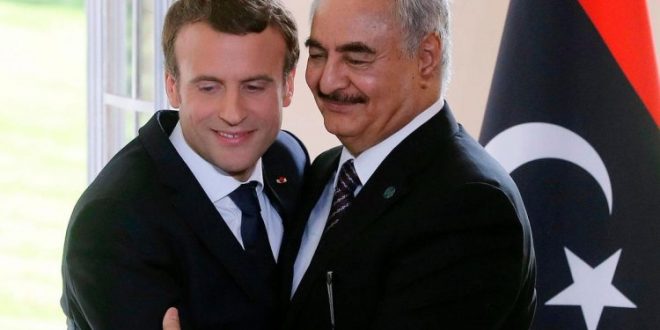 With the collapse of Libyan renegade general Khalifa Haftar’s offensive on Tripoli, alongside Turkey’s emerging dominance in the country after backing the Government of National Accord (GNA), new angles for peace talks are opening up.

Yet France has pursued a single-minded approach to cancel out its rivals and position itself as a dominant power broker in Libya. It now seeks to undermine Turkey’s role, ignoring the urgent need for international unity to solve Libya’s conflict.

France withdrew from Nato’s naval operation along the Eastern Mediterranean this month, highlighting its evident antagonism towards Turkey for effectively thwarting its regional geopolitical interests.

On the one hand, France has presented itself as a neutral diplomatic actor in Libya, reiterating calls for all Libyan actors to return to the negotiating table in a recent joint statement with Italy and Germany.

During the Paris summit aimed at reaching a political solution in 2018, there were concerns from Libyans and other officials that France wanted to supplant UN efforts and steer peace talks towards its own interests. “A number of other Libyans have been invited to attend on the margins but will not be asked to sign the agreement,” the International Crisis Group noted in a statement, suggesting that Paris was trying to select its preferred actors, while excluding others.

The desire of Paris to position itself as an influential foreign policy power was apparent early on. Analysts have argued that one of former President Nicolas Sarkozy’s motives for supporting the 2011 revolution against Muammar Gaddafi was to restore France as a dominant European military power.

After Libya’s subsequent descent into instability, France pursued its own economic and security interests. It began courting Haftar, seeing this ambitious, post-revolutionary warlord as a key partner to guarantee “stability” against extremism and ultimately secure France’s economic interests, such as Total’s oil exploration and production operations.

Unlike some of Haftar’s other backers, including the UAE and Egypt, France has engaged with the GNA and Prime Minister Fayez al-Sarraj. Yet, its underhanded ties with Haftar contradict its stated support for peace initiatives, including January’s Berlin Conference, designed to achieve a ceasefire and enforce an arms embargo. Haftar himself rejects such initiatives, seeking to conquer Libya by force.

Despite France’s gambit, it was clear that Haftar’s offensive would not succeed, instead creating a drawn-out stalemate.

Turkey’s intervention since the start of the year to shore up the besieged GNA has dashed Paris’ vision for Libya. Ankara and the GNA also signed a deal last November, granting Turkey permission to explore Libya’s shores for oil, threatening France’s interests in the Eastern Mediterranean.

France expressed frustration at Turkey’s efforts, and tensions between them erupted. The French navy seized a Turkish vessel delivering arms to the GNA in March, while the French embassy in Greece called the GNA-Turkey deal “invalid”.

Now, Turkey has eclipsed France as a dominant external actor in the country, blowing up France’s strategy. French President Emmanuel Macron has launched repeated verbal attacks against Ankara, noting last month: “I think it is a historic and criminal responsibility for a country which claims to be a Nato member.”

Macron claimed a week earlier that Turkey was playing a “dangerous game” that goes “against all of its commitments made at the Berlin Conference”. He has accused Turkey of being “extremely aggressive”.

The more success Ankara seems to have in Libya, the harsher and more loaded Macron’s words become. But while France blames Turkey for breaching the UN arms embargo, it has addressed neither the UAE’s nor Egypt’s unlawful support for Haftar’s offensive, showing a double standard. Macron also backed Egypt’s peace initiative last month, indicating that it is taking sides with Egypt against Turkey.

French-made Rafale warplanes allegedly hit Turkish forces at the strategic al-Watiya airbase near Tripoli earlier this month, a site the GNA recaptured in May. This prompted speculation that Paris could have been involved, but France has also sold these planes to Egypt.

Regardless of the perpetrator’s identity, this incident symbolises the polarising alliances that are hampering peace in Libya. By taking sides with countries that have driven Libya’s war, France is prioritising stopping Turkey over pushing for peace.

With Haftar’s campaign all but defeated, France will now be flailing for a new approach, particularly after Macron recently suggested that Haftar is becoming a liability. For now, Paris is evidently fixated on countering and vilifying Turkey.

France’s role in Libya is not just about keeping Turkey out, however. Last year, France blocked EU condemnations of Haftar, and it previously supported Haftar against Italy’s support for the GNA, pointing to its rivalry with Rome. All of this has rendered the EU an impotent actor in Libya, even prior to Haftar’s latest offensive and Turkey’s entrance into the war.

France has also largely refrained from criticising Russia’s role, due to their mutual support for Haftar and as a counterbalance against Turkey. This shows Paris’ role in undermining Nato, despite its criticisms of Turkey for doing the same. Nato chief Jens Stoltenberg noted in May that it was ready to support the GNA, but France will not back any initiative that legitimises Turkey’s success.

Even if France does not favour Russia’s role, its own efforts in dividing Europe have granted Moscow freedom to expand into Libya and to become a dominant power broker there, alongside Turkey.

Though it has presented itself as a reliable and diplomatic actor in Libya, France’s actions show that it has been troublesome. Furthermore, it is benefitting from the general absence and indifference of the US towards Libya’s political turmoil.

Should France prioritise collective peace initiatives rather than its own independent goals, this could increase the chances of a resolution to the conflict.