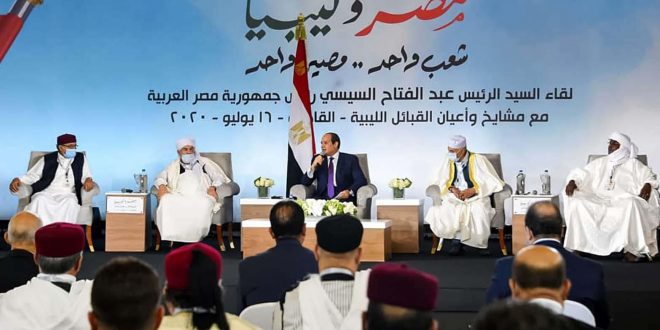 Pro-Haftar tribal elders and dignitaries met Thursday with the Egyptian President Abdel Fattah El Sisi in Cairo in a meeting aimed at staging a military intervention by the Egyptian army in Libya to help raise the stakes of warlord Haftar in the Libyan conflict.

Over 50 elders and dignitaries who are loyal to Haftar and back his war on Tripoli, enlisted in the meeting with El Sisi military intervention by the Egyptian army in Libya. The meeting was upon Sisi’s invitation.

Egypt’s Sisi said in the meeting that his red lines in Libya aim for peace, adding that when he mentioned Sirte and Jufra as red lines, he called for peace and stability.

“We’re ready to train Libya’s tribesmen to build a united national army as we won’t sit idly by to watch threats being made to our national security.” Sisi added.

He also remarked, threatening Libyan people, that his country won’t allow Libya to become a hub for terrorism even if it meant starting a direct Egyptian military intervention in Libya, which was requested by the elders who arrived in Cairo based on the Tobruk-based Parliament’s request as well.