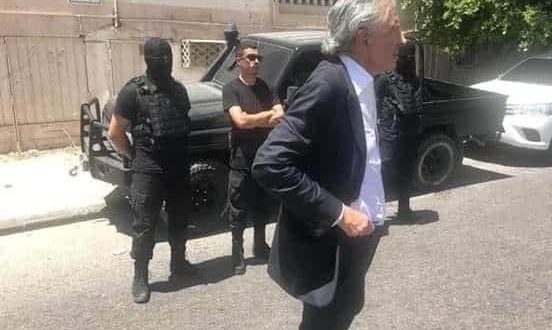 Bernard Levy arrived Saturday in Libya’s Misurata on a private jet on an unannounced visit, aiming as he claimed to make a report for Wall Street Journal on war crimes and mass graves found in Tarhouna.

Many officials at the Government of National Accord (GNA) told media outlets that they had no knowledge of the visit of Levy to Libya and said his presence “was totally rejected”, adding that the GNA didn’t give permission to his plane to land on Libyan soil in Misurata.

Misrata mayor Mustafa Kerwad said that he had no prior knowledge of Levy’s visit to the city or who invited him or who put his own name on the list of people to meet with Levy.

The Head of the High Council of State Khalid Al-Mishri also said that he was surprised that Levy was allowed to enter Misrata amid France’s support for warlord Haftar, saying those behind such a move should be held accountable after thorough investigation.

Levy arrived in Misurata and then went to Tarhouna to document mass graves committed by Haftar’s forces and was scheduled to meet Interior Minister Fathi Bashagha in Tripoli before departing from Misrata Airport, according to sources speaking to local media.

The sources said Levy’s convoy was attacked by gunfire by forces of the Joint Force, which said in a statement that it would prevent Levy from entering administrative borders of Tarhouna even by force.