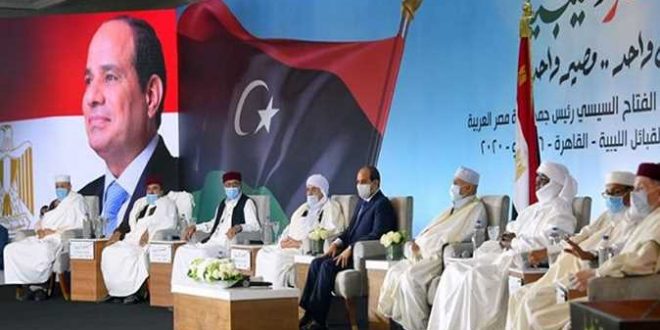 Libyan tribal chieftains said they will file a lawsuit against tribesmen who called for an Egyptian military intervention in Libya, Anadolu Agency reports.

“We announce the launch of lawsuits against [Libyan] citizens who claimed to represent the Libyan tribes and went to Egypt,” reads a document signed by Libyan tribal chieftains.

They condemned “the behaviour of the decision-makers in Egypt by receiving a group of Libyans who claimed to represent the tribes, but they in fact do not represent the will of the Libyan people”.

The chieftains said the behaviour of the Egyptian leadership “was a blatant violation of international law and the UN principles”, going on to stress that those tribesmen “only represent the desires of the criminal Khalifa Haftar”.

Signatories of the document include the elders of the Libyan cities of Zilten, Surman, Khoms, Al-Ajaylat, Janzur, Souq Al-Jum’aa along with the Al-Sahel and Al-Jabal Notables Councils.

In mid-July, the Egyptian President Abdel Fattah Al-Sisi met with a group of Libyan tribesmen, who said they have mandated the Egyptian military to intervene in Libya to “protect the Libyan sovereignty”.

Al-Sisi’s call to arm the Libyan tribes in favour of Haftar against the Libyan Internationally-recognised government has drawn a widespread criticism inside Libya.

Since April 2019, Haftar’s illegitimate forces have launched attacks on the Libyan capital of Tripoli and other parts of northwestern Libya, resulting in more than 1,000 deaths, including civilian women and children.

But the Libyan government has recently achieved significant victories, pushing Haftar’s forces out of Tripoli and the strategic city of Tarhuna.

Haftar has been supported internationally by Russia, France, Egypt, and the UAE.