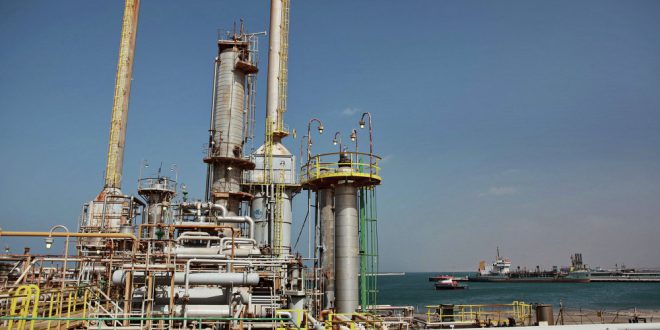 The Libyan National Oil Corporation (NOC) has said it is deeply concerned about the continuing militarization of its oil facilities and the heavy presence of foreign mercenaries at various oil fields and ports in the east and south of the country.

NOC added in a statement Wednesday that mercenaries at Ras Lanuf petrochemical complex, Zueitina oil port and Zallah field are a threat and may lead to the destruction of the Libyan people’s sole source of revenue .

“The number of mercenaries at the Ras Lanuf petrochemical complex has recently increased. Their presence constitutes a threat to the safety of workers and industrial facilities within the complex. There are also a large number of military personnel billeted in worker housing inside the residential area of Ras Lanuf town, in a flagrant violation of the law, privacy and security of worker housing.” The NOC added.

The NOC said that in another blatant violation of the law, on Sunday, July 26, 2020, the Petroleum Facilities Guard (PFG) forcibly seized large quantities of jet fuel from fuel storage tanks at 103 Field airstrip belonging to Zueitina Oil Company, adding that the fuel was then taken offsite in two fully laden trucks.

“Further, on Saturday July 25, 2020, a military aircraft landed at Zueitina port with uniformed personnel onboard, who inspected the runway in preparation for military use. Afterwards, foreign mercenaries entered and occupied the worker housing at Zueitina port.” NOC explained.

NOC said it had also received reports of large numbers of mercenaries with military vehicles occupying the residential area of the Zallah oil field, saying that another group is occupying a Schlumberger Company camp located close to the field.

“To protect Libyan oil facilities, NOC continues to monitor the situation closely. Illegal activities taking place in and around NOC facilities are being documented. NOC will not hesitate to seek prosecution for those who damage Libya’s sole source of revenue.” The statement said.

NOC reiterated its calls for withdrawal of mercenaries and the demilitarisation of oil facilities so that its workers can carry out their work without putting their lives in danger, adding that their safety as well as the security of oil facilities must remain paramount.