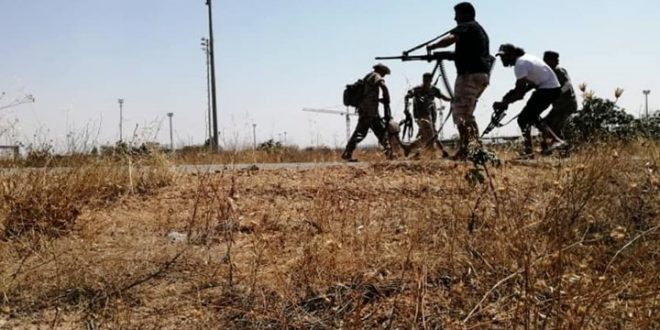 A Syria-based Russian security company – in collusion with the Syrian government- recruited no fewer than 3000 Syrians, both civilians and fighters, from various provinces as mercenaries to transfer them to Libya, where they are to fight alongside Khalifa Haftar’s forces against the Government of National Accord (GNA), Syrians for Truth and Justice Organization said.

It added that the recruitment started in Suwaida province in December 2019, followed by Quneitra, Daraa, Damascus, its countryside, Homs, Hama, al-Hasaka, Raqqa, and Deir ez-Zor, while it notably adopted an accelerated pace in May 2020.

“The field researchers of Syrians for Truth and Justice reported that the recruitment was yet in progress when the report was being composed —namely on 30 June 2020.” It added.

The information obtained by the organization indicated that Syrian fighters were recruited under contracts providing each conscript with a salary of $800 to $1500, in addition to privileges, such as the vindication of persons involved in security issues, and are thus prosecuted by the Syrian government, or exemption from military service, reserve and mandatory, within the ranks of the Syrian regular army.

The report discloses that several Syrian government-affiliated figures are involved in these recruitments, including “Sh. al-Sha’er”, director of the government-licensed Syrian National Youth Party’s Bureau, officials of the National Defense Forces in Suwaida province and commanders of the Russia-founded 5th Legion,[2] which operates in southern Syria and encompasses former armed opposition fighters in particular, who joined the forces of the Syrian government after sealing a settlement/reconciliation agreement.

According to a number of eyewitnesses, particularly fighters, civilians and fighters are transferred to Libya onboard civilian airplanes of Cham Wings Airlines or attack aircraft departing from Khmeimim Air Base in Latakia.

As for the landing, Syrian recruits reach one of the four following chief destinations in Libya: Benina International Airport, al-Khadim Air Base, al-Jufra Air Base and Bani Walid Airport.

Previous reports referred to Russian Wagner Group’s sending of thousands of Syrians from Assad-controlled areas to Libya to fight for Haftar and secure the oil facilities under his control.

This was confirmed by the National Oil Corporation, which confirmed the Russian Wagner Group and Syrian mercenaries had been staying inside oil fields and Es Sider and Was Lanuf terminals.