Home / Normal / US calls for political solution in Libya, targets smugglers with sanctions 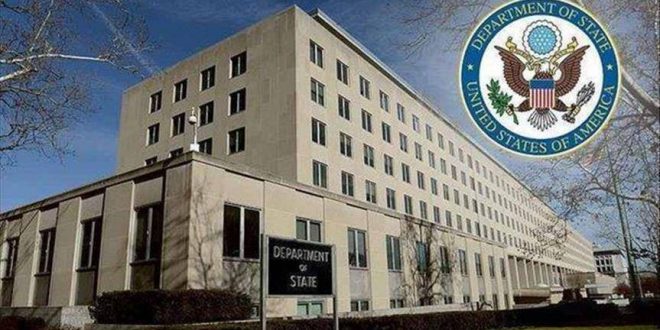 US calls for political solution in Libya, targets smugglers with sanctions

The US State Department renewed calls for a political solution in Libya as it slapped a Libyan exporter and several others with sanctions over fuel and drug smuggling out of the war-torn country.

Secretary of State Mike Pompeo raised the crisis in Libya during a call on Thursday with Foreign Minister Sameh Shoukry of Egypt, a top backer of Libya’s eastern military commander Khalifa Haftar.

During the call, Pompeo and Shoukry discussed the “importance of supporting a UN-brokered ceasefire in Libya through political and economic talks,” State Department spokesperson Cale Brown said in a statement.

Cavusoglu said a ceasefire should see the UN-recognised Government of National Accord (GNA) exerting control over areas held by Haftar, who has suffered losses but still controls large parts of eastern Libya.

Amid the instability, the US on Thursday imposed sanctions on Libyan national Faysal al-Wadi, two of his associates and the Malta-based company Alwefaq Ltd on allegations of smuggling.

The Treasury Department said Wadi and his Maraya vessel have been smuggling fuel and drugs from Libya to Malta, a gateway to the European Union.

“Faysal al-Wadi and his associates have smuggled fuel from Libya and used Libya as a transit zone to smuggle illicit drugs,” Deputy Secretary Justin Muzinich said in a statement. “The United States is committed to exposing illicit networks exploiting Libya’s resources for their own profit while hurting the Libyan people.”

The order freezes any assets in the United States and opens the way for criminal prosecution over transactions with the individuals, company or ship.

Libya has been mired in chaos since a western-backed uprising toppled long-time Libyan ruler Muammar Gaddafi in 2011.

Haftar’s violent bid to seize Tripoli has been backed by US allies Saudi Arabia, Egypt and the United Arab Emirates as well as Russian mercenaries.

The White House on Tuesday called for a solution that includes a withdrawal of all foreign military personnel.

Still, late last month the US threatened Haftar with sanctions as it accused the Wagner Group, a Russian military contractor with ties to the Kremlin, of seizing the country’s largest oil field and export terminal.

Haftar’s forces, which control the bulk of Libya’s key oil infrastructure, have imposed a blockade on all Libyan oil terminals since January. The blockade has cost the war-ravaged country billions in revenue and sent production plummeting from more than 1 million barrels per day (bpd) to fewer than 100,000 bpd.

International Relations and CooperationTrafficking and Migration
All
2020-08-06
asaeid
Previous Game Changer: Russia May Have S-400 Air Defense System In Libya
Next Turkish Foreign Minister says proposal to surrender to GNA control of Sirte and Jufra is under negotiations