Home / Normal / Libya’s GNA response to Egypt, Greece after maritime border demarcation: ‘We will not allow anyone to violate our rights’ 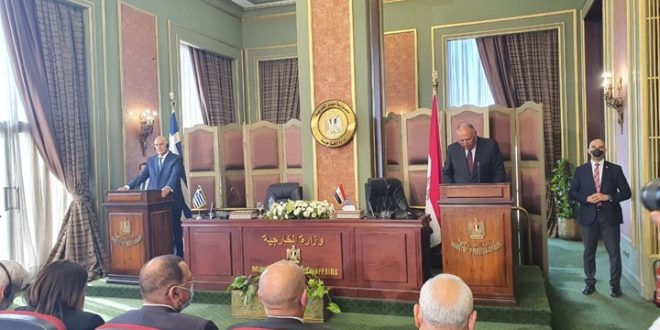 Libya’s GNA response to Egypt, Greece after maritime border demarcation: ‘We will not allow anyone to violate our rights’

The Turkish-backed Libyan Government of National Accord (GNA) stressed that it will not allow any party to violate its maritime rights, responding to the conclusion of an agreement on Thursday between Egypt and Greece on the demarcation of their maritime borders.

In a statement published on its Facebook page, the Foreign Ministry of the GNA, which resulted from the Skhirat Agreement, stated that it had “followed with great interest” the signing of the agreement on the designation of exclusive economic zones in the Mediterranean between the two countries (Egypt and Greece), and the statement made by Greek Minister Nikos Dendias during a press conference held on Thursday in Cairo.

“At a time when the Ministry of Foreign Affairs of the GNA asserts that Libya has called and is calling for making the Mediterranean a peaceful zone, and for the neighbouring countries to behave in a way that allows the maritime borders between them to be defined on the basis of consensus and on the respected principles of international law, the ministry insists that no party is allowed to violate our maritime rights,” the ministry added.

The ministry reaffirmed its implementation of the memorandum of understanding on the delineation of maritime borders concluded between the GNA and Turkey last November, noting that this agreement: “Does not contradict the international law of the seas and international agreements and covenants in particular.”

Turkey announced its rejection of the Egyptian-Greek agreement, pointing out that it affects an area of the Turkish continental shelf and violates Libya’s maritime rights.

Border ManagementInternational Relations and Cooperation
All
2020-08-08
asaeid
Previous US, Libyan officials agree on need for deescalation and reopening of oil, resumption of political track
Next Fearing public protests, Al-Sarraj blesses anti-corruption work and urges for accountability