Home / Normal / US, Libyan officials agree on need for deescalation and reopening of oil, resumption of political track 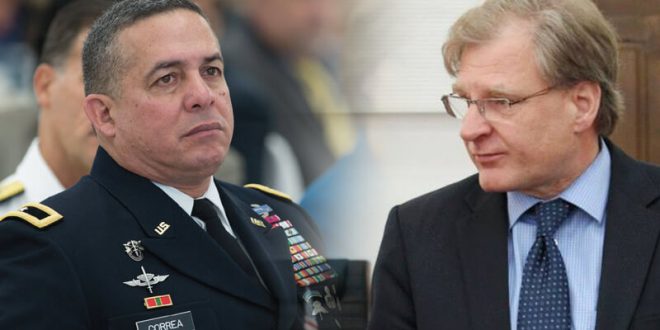 US, Libyan officials agree on need for deescalation and reopening of oil, resumption of political track

The US embassy in Libya said on Friday that a US delegation, led by National Security Council Senior Director for the Middle East and North Africa Major General Miguel Correa and Ambassador Richard Norland, held virtual discussions with Libyan officials to advance concrete, urgent steps to find a demilitarized solution for Sirte and Jufra, and reopen Libya’s oil sector with full transparency.

In separate discussions with National Security Advisor Taj Al-Deen Al-Rezagi and House of Representatives Foreign Affairs Committee Chair Yousef Al-Agouri, Major General Correa and Ambassador Norland underscored the need for a Libyan-led process to reclaim the country’s sovereignty and eject foreign forces, according to the US embassy’s statement.

The statement said that the US will continue to actively engage a range of Libyan leaders who are ready to reject harmful foreign interference, deescalate, and come together to realize a peaceful solution that benefits all Libyans.

International Relations and CooperationNatural Resources GovernanceSecurity Situation
All
2020-08-08
asaeid
Previous Egypt, Russia deploy anti-aircraft systems in Libya to support Haftar
Next Libya’s GNA response to Egypt, Greece after maritime border demarcation: ‘We will not allow anyone to violate our rights’