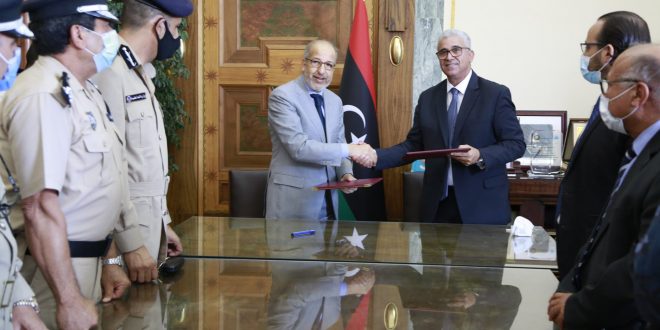 The Governor of the Tripoli Central Bank of Libya (CBL) in his role as chairman of the National Anti-Money Laundering and Terrorist Financing Commission signed a cooperation agreement yesterday with Fathi Bashagha, Tripoli’s Interior Minister.

The Ministry of Interior said that the signing of this agreement is the culmination of what was agreed at the meeting of the National Committee of the Libyan state’s commitment to standards and best practices in order to achieve effective and fruitful cooperation to reduce corruption and uncover crimes of money laundering and terrorist financing. It is understood that the Central Bank of Libya has agreed to cooperate with a specialized auditing company to review, examine and audit all its accounts to apply the principle of transparency. For its part, the Interior Ministry agreed to take the same step to review all its accounts and contracts.

The agreement comes on the back of a meeting by Libya’s internationally recognized prime minister, Faiez Serraj, with the country’s three main oversight bodies, the Audit Bureau, the Administrative Control Authority and the National Anti-Corruption Commission on 8 August where he pledged his full support for their oversight efforts.

Serraj had stressed his full support of the bodies to conduct investigations and inspections of all files related to corruption and waste of public funds.

He also stressed that all institutions of the government sector must comply and cooperate with these bodies, stressing the need to establish the principle of transparency and integrity, and the rules of governance.

Serraj also confirmed his full support of the agreement between the three bodies to formation a national team to develop the national strategy to combat corruption.

During the meeting it was also agreed to activate the existing but unused financial disclosure system for state officials and speed up the adoption of the public sector corporate governance manual.

It will also be recalled that Libya’s two competing Central Banks have now agreed to an independent international audit.

Budget and Finance
All
2020-08-11
asaeid
Previous U.S raises travel advisory for Libya to level four: Do Not Travel
Next UNICEF provides essential services to over 30,000 people in Libya during 2020