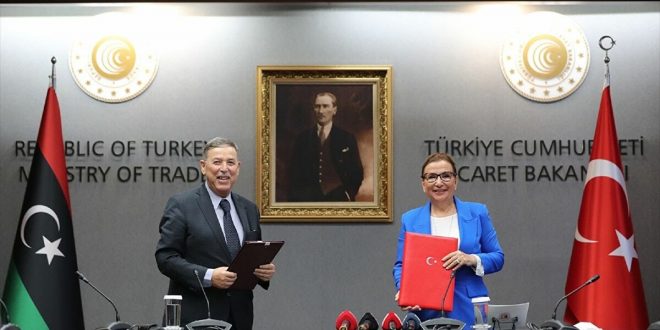 Libya and Turkey have inked a memorandum of understanding (MoU) to boost trade and economic ties, the Turkish trade minister said Thursday.

Pekcan told how some construction projects begun by Turkish companies in Libya had recently been interrupted.

“There were uncertainties regarding completion of these projects and Turkish companies had remaining receivables in these projects,” she said.

Pointing to the brotherly ties between the two countries, Pekcan said this is also reflected in their bilateral economic and trade ties.

“This process will be a new opportunity to show the whole world Turkish-Libyan cooperation,” Pekcan underlined.

Meanwhile, Al-Hadi Al-Taher Al-Juhaimi, Libya’s planning minister, also stressed the importance of the deal for clearing up pending issues between Turkey and Libya.

Praising Turkish contractors’ works in Libya, Al-Juhaimi said Turkish firms are behind 20% of the investment projects in the country.

“We may call this the lion’s share,” he stressed, adding that after Libya ends its domestic crises, the country will focus on new development plans.

“We trust Turkish companies and are willing to partner with them under this development plan.” He indicated.