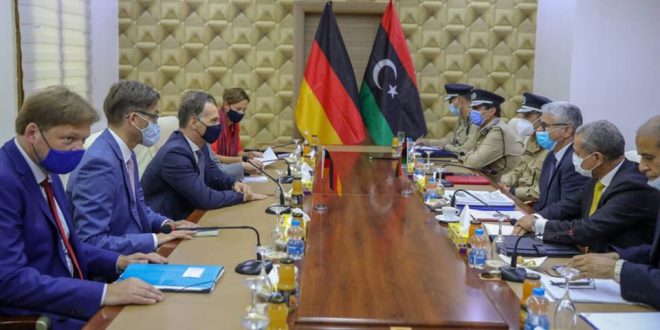 The Libyan Interior Minister Fathi Bashagha has linked Berlin Conference to the first step of solution to the Libyan crisis, urging European countries, especially Germany, to pressure countries supporting Khalifa Haftar to stop escalation and creation of tensions among social communities in the country.

The remarks came in a meeting for Bashagha with the German Foreign Minister Heiko Maas in Tripoli on Monday, when Bashagha hailed Berlin’s efforts to make peace in Libya.

He also touched on the oil blockade, saying the financial losses and low production of oil came from political division.

Bashagha has reiterated illegal immigration is an issue that threatens the whole region as well as Libya, which shouldn’t bear the burden of immigrants on its own as it poses a threat to the Libyan national security.

Maas said he was sorry for how things turned out to be in Libya as all parties distanced themselves from Berlin conference conclusions, stressing the need for a ceasefire as the conflict had badly impacted oil exports and output.

Maas arrived Monday in Tripoli and met with the Head of Presidential Council Fayez Al-Sarraj and Foreign Minister Mohammed Sayala, among other officials.