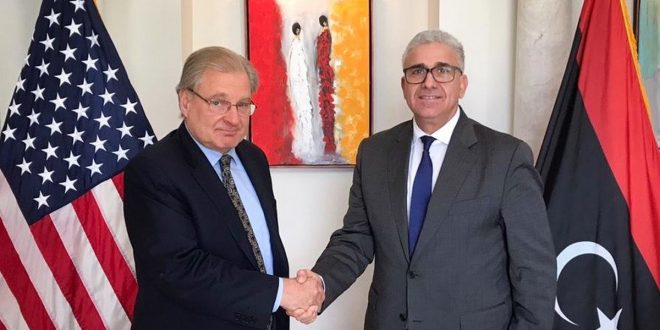 The US ambassador to Libya, Richard Norland, praised the Turkish intervention in Libya, which contributed to turning the scales in favour of the UN-recognised Government of National Accord (GNA).

This came in an interview with Hurriyet Daily News, while he was in Ankara last week.

In the report, translated by Arabi 21, the US official said that Turkey prevented General Khalifa Haftar from seizing Tripoli and that Turkey’s military intervention paved the way for a political settlement in the country.

Norland said that what changed the course of events in Libya was the massive increase in Russian presence through the Wagner mercenary group since November.

He added: “Supported by Wagner, Haftar was really on the verge of seizing Tripoli and the Turkish military intervention prevented that and has now pushed Haftar forces and supporters back to the central part of the country, Sirte and Jufra.”

“The atmosphere in Tripoli was transformed when the bombardment, the artillery, and the shelling stopped; the siege was lifted and Libyans in the West really never want to go through that again. To the extent that the Turkish presence can help ensure that there is not going to be another attack on Tripoli, that’s a positive development.”