Home / Normal / What’s the message behind commemoration of LNA in Cairo? 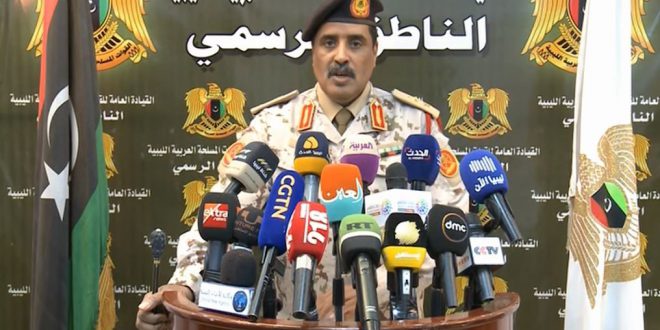 What’s the message behind commemoration of LNA in Cairo?

The Libyan National Army (LNA), led by Field Marshal Khalifa Hifter, organized a major celebration on the occasion of its 80th anniversary on Aug. 10 in the Abu Rawash area west of the Egyptian capital Cairo, near the monument of the founding of the LNA.

In a speech during the celebration, Mesmari stressed the need for Turkey to leave Libya‘s political and military scene, indicating that this commemoration is a “clear message to the conspirators and to the colonialists that [the Libyans] will not neglect their land and their dignity nor the Arab world.”

The celebration featured a video depicting the depth of Egyptian-Libyan relations and how the LNA defeated the Italian invasion and regained all the areas Italy had controlled in Libya during its colonization.

Brig. Gen. Khaled Okasha, head of the Egyptian Center for Strategic Studies, told Al-Monitor over the phone that the celebration of the LNA’s 80th anniversary has clear indications, especially at this time when the conflicts between Turkey and Egypt are raging on several axes, most notably regarding the Turkish intervention in Libyan affairs, not to mention the Syrian and Iraqi affairs, which Egypt rejected in an official statement issued by its Ministry of Foreign Affairs.

On July 18, the Egyptian Ministry of Foreign Affairs issued an official statement expressing its “rejection of Turkish political and military interference in Arab affairs, be it in Iraq, Syria or Libya.”

Okasha said, “Ankara insists on exploring gas in the Mediterranean in Greece’s economic zones, which is also rejected by Egypt, especially after it signed an agreement to demarcate the maritime borders between Egypt and Greece on Aug. 6, to define areas of influence in the eastern Mediterranean after discovering large quantities of gas in that area.”

He pointed out that the political and military conflict in Libya harms Egypt and affects its national security because Libya is located on the western borders of Egypt, stretching over 1,000 kilometers (621 miles). This is why Cairo is trying hard to reunite the Libyan diaspora and reach a political consensus that brings the Libyan parties together around one table, in order to reach an understanding and end the conflict that has been going on since 2011, Okasha said.

He stressed that holding this celebration in Egypt represents a warning to the Turkish side, which further complicates the conflict in Libya, where Turkey has been helping Libya’s Government of National Accord (GNA), led by Fayez al-Sarraj, and bringing terrorists and mercenaries in from Syria to confront the LNA and the Libyan people.

He noted that Egypt presented the Cairo Declaration initiative on June 6 in a bid to calm the situation and reach a political solution; the initiative included a cease-fire and the dismantling of militias.

Okasha added that Egyptian President Abdel Fattah al-Sisi warned on June 20 against crossing the Sirte-Jufra red line, and it has not been crossed by the Sarraj forces or Turkey since then — which shows how important and effective the Egyptian role is in supporting the LNA.

Meanwhile, Egyptian parliament member Mustafa Bakri, who attended the celebration, told Al-Monitor over the phone that this commemoration from the heart of Cairo and the great media coverage that it had clearly indicates the strength of extended relations between Egypt and Libya.

“Libya is an integral part of Egyptian national security, and Egypt always calls for peace and only a fair peace that guarantees the withdrawal of Turkish forces and the dismantling of extremist militias and terrorist groups they support,” he noted.

Bakri pointed out that this celebration in Cairo holds many nods, namely that Egypt supports the LNA in its battle against the militia government and against Turkish intervention in Libya, stressing that Turkey is trying to practice a policy of aggression and seeks to seize the wealth of Libya, but Egypt will not let that happen.

He noted that Cairo will put an end to Turkish intervention by supporting the LNA and the Libyan people, indicating that the Egyptian army is ready for any combat missions outside its borders, as Sisi himself stated.

Bakri said that the monument in the Abu Rawash area was built in 1956 to commemorate the establishment of the LNA in 1951 to resist the Italian occupation at that time. He added that 80 years ago, specifically in August 1940, the Abu Rawash area witnessed the first gathering of Libyan mujahedeen, and that was the nucleus of establishing the LNA in its current form.

Ayman Samir, an expert in international relations and a researcher at Al-Ahram Center for Political and Strategic Studies, told Al-Monitor that this celebration sends clear messages that the LNA and the Egyptian army are inseparable, and this was confirmed by the presence of a number of Egyptian army leaders and Egyptian parliament members as well as leaders of the LNA, the Libyan minister of foreign affairs and tribal sheikhs.

Samir said this aims to show a unified vision and common destiny between Egypt and Libya in the face of Turkish military intervention in Libyan territories.

He noted that the presence of senior government figures and military leaders from Egypt and Libya at the ceremony clearly shows that Egypt has always been and will always be the closest to Libya, and that the Egyptian government and the Egyptian army stand behind Libya to protect its capabilities and wealth, and to clearly and unequivocally support the Libyan people and the LNA.

International Relations and CooperationSecurity Forces
All
2020-08-18
asaeid
Previous Pandemic starts to surge in conflict-hit Libya
Next War can break in Libya at any moment, Interior Minister says