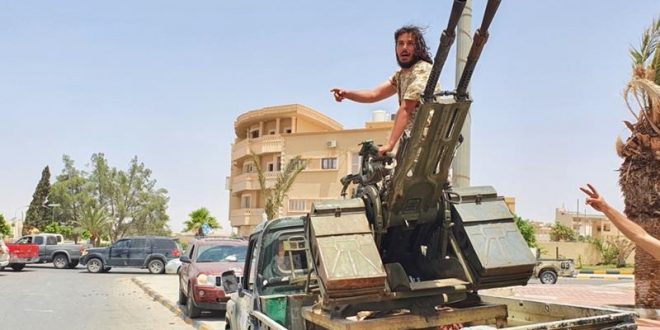 The Turkish military will provide assistance to restructuring the Libyan Army into a regular army based on the model that was used in training the Azerbaijani Army. Meanwhile, forces loyal to the internationally recognized government in Tripoli captured another Russian military helicopter belonging to putschist Gen. Khalifa Haftar’s militias near Sirte.

Turkish military advisers and staff will soon arrive at the Defense Security Cooperation and Training Assistance Advisory Command that was established as part of a memorandum of understanding between Turkey and Libya. They will provide training and logistical assistance in cooperation with Qatar to reestablish a regular army in Libya.

The Libyan Army is currently an informal amalgamation of militias, tribal soldiers and clansmen. The process by Turkey and Qatar would standardize training and recruitment and make it an official army.

The process is similar to a military training agreement signed by Baku and Ankara in 1993 in the face of Armenian aggression in the Nagorno-Karabakh region. Turkish gendarmerie forces provided training and assistance to their Azerbaijani counterparts, while Azerbaijani army staff also spent time in Turkey to receive training. Turkish air force pilots also provided training, and the Azerbaijani military received technical equipment support from Turkey.

In January, Turkey began deploying soldiers to Libya after Parliament approved a motion responding to Libya’s call for Turkish troops.

Libya and Turkey signed agreements in November outlining cooperation in terms of security and maritime affairs, angering Mediterranean countries, including Greece and the Greek Cypriot administration. The diplomatic maneuver prevents the Greeks and Greek Cypriots from unilaterally exploiting energy resources in the region.

Libya’s Government of National Accord (GNA) made a formal request for “air, ground and sea” support from the Turkish military to help fend off an offensive by forces loyal to Haftar, who is attempting to take control of the capital, Tripoli. Turkey supports the GNA, which is also backed by the United Nations, against Hafter’s militia and mercenaries.

Meanwhile, GNA forces have announced the capture of a Russian-made Mil Mi-17-type helicopter near Sirte.

The helicopter was abandoned by Haftar’s militias for unspecified reasons, Anadolu Agency (AA) reported Wednesday. It was transported to the Abu Ghurayn district controlled by GNA forces near Sirte, the report said.

East Libya-based Haftar on Tuesday lifted the blockade on oil production in the country after several months, according to the head of Libya’s Petroleum Facilities Guards.

“Haftar gave the order to reopen the ports and facilities in order to end the problems experienced by the Libyans in many areas of life and to protect the infrastructure of the oil production and export facilities,” said Naji al-Maghribi.

Oil production has almost come to a standstill in Libya after pro-Haftar groups shut down oil facilities in eastern parts of the country in January to squeeze resources of GNA.

Libya, with the largest oil reserves in Africa, can produce 1.2 million barrels of crude oil per day. But production has fallen below 100,000 barrels a day due to the interruptions by the pro-Haftar militias over the past seven months.

Libya has been mired in strife since the ouster of late strongman Moammar Gadhafi in 2011.

The new government was founded four years later in 2015 under a U.N.-led agreement, but efforts for a long-term political settlement have so far failed due to the military offensive by Haftar.

Since April 2019, Haftar’s forces have launched attacks on Tripoli and other parts of northwestern Libya, resulting in more than 1,000 deaths, including civilians. Haftar has the support of the United Arab Emirates (UAE), Egypt and Russia while the U.N.-recognized government is backed by Turkey and Qatar.