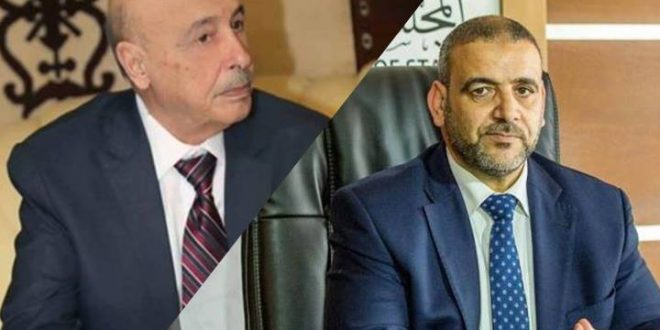 Chairman of Libya’s High Council of State, Khalid Al-Mishri, announced that he is ready to meet with Aguila Saleh, speaker of the pro-Haftar parliament based in Tobruk, in Morocco, Anadolu reported yesterday.

Speaking to Moroccan Media 1 TV, Al-Mishri set conditions for the meeting which he said should be part of Rabat’s efforts to resolve the Libyan crisis.

“There are efforts being made by Morocco under the supervision of King Mohammed VI to advance diplomatic efforts to solve the Libyan crisis,” he said.

“In this regard, we visited Morocco [in July], coinciding with the presence of Aguila Saleh in the kingdom. We said we are ready to meet with him in public, but on the condition of international guarantees and the presence of our Moroccan brothers.”

The top official said he was ready to meet all parties to the Libyan conflict on the same conditions.

“We trust the Moroccan leadership wants to reach a [just] solution and not secure the interests of one party at the expense of the other,” Al-Mishri said.

Haftar’s militias launched a one-year offensive on Tripoli to overthrow the legitimate government, which is backed by the international community, in 2019.

No county has intervened to protect the internationally recognised government except Turkey, which signed two important understandings with Libya.

The Libyan forces, backed by the Turkish army, ended the offensive and pushed Haftar’s militias far from Tripoli and have been preparing for a new offensive to liberate Jufra and Sirte.

Turkey continues to support the internationally recognised government, while Haftar has been backed by Russia, France, Egypt, Russia and the UAE.