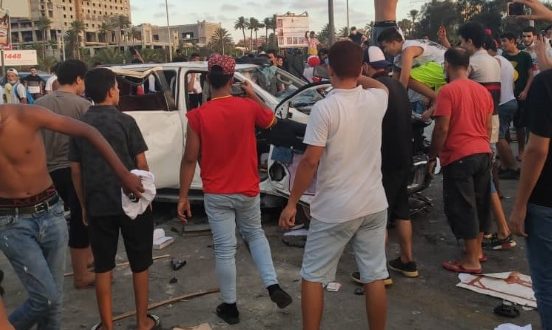 Libya’s government in Tripoli on Thursday warned it would use force against militia gunmen who broke up peaceful protests by firing at crowds the day before.

Demonstrations began on Sunday in Tripoli, when protesters marched to the headquarters of the UN-backed Government of National Accord (GNA) to voice anger over what they called a “slow death” due to collapsing public services, corruption and economic pressures.  Other rallies took place in the country’s third-largest city, Misrata, as well as al-Zawya, west of the capital.

He promised to “protect unarmed civilians from the brutality of a gang of thugs” and said he was ready to use force to do so.

The minister’s statement came as Amnesty International said that armed men abducted at least six unarmed protesters at Sunday’s protests in Libya’s capital, and used live fire to disperse a demonstration, wounding others.

“At least six peaceful protesters were abducted and several others were wounded after armed men fired live ammunition including from heavy machine-guns to disperse a demonstration in Tripoli,” Amnesty said in a statement on Wednesday.

The London-based rights group said Sunday’s attack took place in a district controlled by a militia aligned to Tripoli’s UN-recognised Government of National Accord (GNA).

Witnesses said that no warning was given before the live rounds were fired and gave “strong indications” that the militia was responsible, the watchdog said.

“Videos also show assailants using a heavy machine-gun mounted on a pick-up truck to fire live rounds into the air to disperse the protesters,” Amnesty added.

The demonstrations continued on Wednesday for the fourth day. A protester who spoke on condition of anonymity to Al Jazeera said militiamen opened fire on protesters in Tripoli’s Martyrs Square, the site of Sunday’s attack, again on Wednesday. He said dozens of protesters were detained and their whereabouts unknown.

A pledge on Monday by GNA leader Fayez al-Sarraj to carry out a cabinet reshuffle failed to quell protests. On Wednesday, Sarraj chaired a security meeting to discuss “the clashes” in Tripoli and what triggered them.

A statement from the GNA on Facebook added the meeting underscored the need to “implement measures to ensure the safety of citizens”.

It also called for a probe into “violations” committed against protesters, especially anyone who sustained injuries, and ordered the release of those not involved in acts of “vandalism”, it added.

After the meeting, a separate GNA statement announced Tripoli and its suburbs would be placed under total lockdown from 6:00pm (1600 GMT) Wednesday until 6:00am (0400 GMT) on Monday morning.

On Monday, the UN mission in Libya, UNSMIL, called for an “immediate and thorough investigation into the excessive use of force by pro-GNA security personnel”.

Amnesty echoed the appeal, calling for a “thorough, impartial, independent and transparent investigation into the unjustified use of force against protesters”.

“The GNA has the responsibility to uphold the right to peaceful protest, protect protesters from those seeking to silence them with live ammunition and address the underlying issues that have led people to come out onto the streets,” said Diana Eltahawy, Amnesty International’s deputy regional director for the Middle East and North Africa.

The country’s main military fault-line is between forces that back the GNA and eastern commander Khalifa Haftar, who runs a rival administration.

The situation has been compounded by the coronavirus pandemic, which has depressed global oil prices and spread in the hydrocarbon-rich country despite social distancing measures.

The protests began days after the country’s warring rival administrations announced separately that they would cease all hostilities and hold nationwide elections.