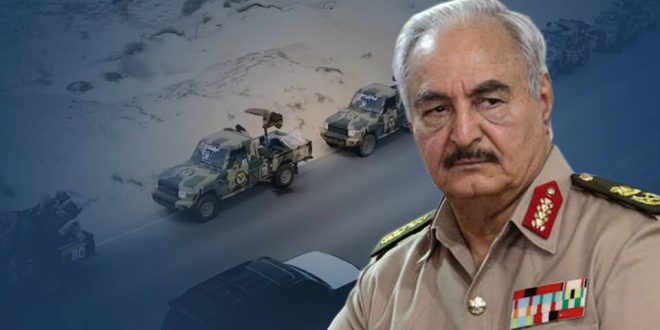 Two Libyan families are suing Khalifa Haftar for alleged war crimes in a US court, accusing the US national of murder and a starvation siege that forced civilians in a Benghazi neighbourhood to eat grass and tree bark.

The claim was filed on Thursday in the district court of eastern Virginia by two relatives of Haftar’s alleged victims, Ali Abdalla Hamza and Salimah Jibreel, who say that the commander of the self-styled Libyan National Army (LNA) is responsible for the deaths of their family members.

The lawsuit focuses on the LNA’s siege of Benghazi in 2016, particularly the district of Ganfouda, where repeated air strikes by Haftar’s forces pinned down hundreds of civilians.

Hamza says he had to flee his home in the area after it was bombarded and looted.

His wife, Aalya, his two brothers, Ibrahim and Naser, and his three sisters, Fariha, Faiza, and Abtisam, took shelter in an unoccupied apartment in the suburb of Ganfouda, where they ate tree bark and grass and drank water from puddles in order to survive.

The case states that the Hamza family members became so weak that they could barely walk, and there was repeated artillery and aerial bombing attacks all around them.

“The combination of the engulfing dust from the bombing attacks and starvation caused them to experience temporary blindness,” the suit said.

Her sole surviving daughter was injured, as was her husband, Alaa, who has since been detained by LNA forces and is still being held incommunicado.

While US courts accept civil claims by American citizens seeking compensation for acts of terrorism by foreign powers, the Torture Victim Protection Act of 1991 allows for non-US citizens to do so against individuals who, acting in an official capacity for any foreign nation, have allegedly committed torture or extrajudicial killing.

The law is aimed at perpetrators of torture who are acting under apparent government authority.

After Haftar failed in a coup attempt against Libyan leader Muammar Gaddafi in 1987, he arrived in the US for protection, and eventually became an American citizen.

Haftar’s family, including his sons Khalid and Saddam, settled in northern Virginia, where they reportedly bought a total of 17 properties, including an 85-acre estate in Keysville, Virginia.

In 2011, when Gaddafi was overthrown by rebels and later killed, Haftar returned to Libya and served as the head of the military for Libya’s internationally recognised government, the Government of National Accord (GNA).

He has since turned on Tripoli, accusing the UN-recognised government of being a safe haven for armed groups and militias.

His forces are fighting the interim government with the backing of Egypt, the United Arab Emirates and Russian mercenaries.

Two other Libyan families had filed a similar lawsuit against Haftar in February, alleging that forces loyal to the eastern military commander tortured their family members to death.

Haftar initially did not respond to the suit, but after facing the possibility of a default judgment, he hired lawyers to defend himself. His legal team claims the Libyan commander is immune from prosecution since he should be treated as a head of state.

However, Thursday’s claim says Haftar cannot “rely on any invocation of sovereign immunity as he is not recognized as a head of state”.

Instead, the lawsuit argues that he is subordinate to the Tobruk-based House of Representatives.