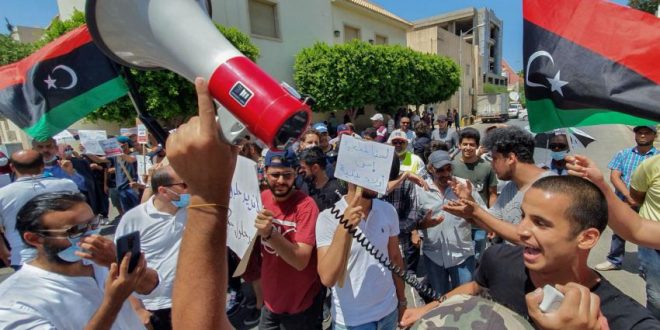 Arrest warrants issued for Tripoli protests shootings, one under arrest; 13 out of 21 Tripoli demonstrators released – 8 still held for questioning

The Attorney General’s Office in Tripoli confirmed yesterday the issuance of arrest warrants for suspects from the state-recognized security forces accused of shooting at Tripoli demonstrators on 28 August. It also confirmed that a suspect has been arrested and is still under investigation.

The Attorney General’s Office also confirmed social media reports that 13 protesters detained in Tripoli have been released, adding that eight other protesters were still detained on suspicion of involvement in riots.

The ‘‘Harak 23 August’’ (23 August Movement) which organized the demonstrations through its social media campaign confirmed the release of at least four of its arrested members.

It will be recalled that on 28 August the Tripoli Interior Ministry had announced that it had arrested one of the suspects in the shooting of protesters in Martyrs Square in central Tripoli.

The demonstrations were organized against the Skhirat-created internationally recognized Libyan government in Tripoli led by Faiez Serraj in protesting against miserable living conditions throughout the government’s five-year term.

The political fallout from the protests and the shooting at them by officially recognized state security forces forced Serraj to issue a series of decrees aimed at sedating the public mood. It also led to him suspending his Interior Minister, but was forced to reinstate him under huge domestic and international pressure.

In her latest report on Libya to the UN Security Council on 2 September, UNSMIL Acting Head, Williams, referred to the situation as ‘‘The immiseration of the Libyan people’’. She added that ‘‘In recent days, Libyans have come out in force throughout the country, most notably in Tripoli, to express their anger over the lack of basic services, widespread water and power cuts and rampant corruption.

‘‘All these elements are producing a fertile ground for social unrest across the country and confirm once more that the status-quo is simply unsustainable. The socioeconomic impact of COVID-19, along with the protracted crisis and the deteriorating public services, continued to stretch the coping capacities of those in the most vulnerable circumstances. Instability is further compounded by degraded socio-economic conditions, fuelling popular unrest and threatening the fragile calm required to advance our security and political discussions’’.