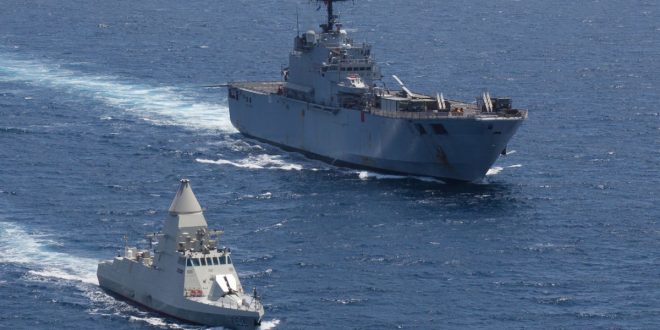 A merchant ship carrying jet fuel to Libya from the United Arab Emirates was stopped and inspected by European Union authorities on Thursday to determine whether the vessel had breached a United Nations arms embargo, EU officials said.

Two frigates stopped the Royal Diamond 7 roughly 150 kilometers north of the Libyan city of Derna in the Mediterranean Sea, according to a statement from the EU’s naval mission monitoring Libya, Operation Irini.

The ship had left from the Emirati port of Sharjah and was en route to the Libyan city of Benghazi “carrying a cargo of jet fuel, likely to be used for military purposes” in violation of the UN embargo.

The UN Panel of Experts on Libya alerted the EU naval authorities of the “suspicious nature of this cargo,” and after the initial inspection, the Royal Diamond 7 was diverted to an EU port for further investigation.

Irini is tasked with enforcing the UN arms embargo that’s been in place since Libya’s longtime dictator Moammar Gaddafi was toppled in 2011. Since beginning its work in May, the EU operation has monitored suspected vessels at more than 10 ports and landing points and detected 80 flights suspected of carrying military cargo to and from Libya.

For the past six years, Libya has been embroiled in a civil war pitting two rival administrations, their foreign backers and proxy fighters against each other. The internationally recognized Government of National Accord (GNA) is supported militarily by Turkey, and Gen. Khalifa Hifter’s eastern-based Libyan National Army counts the United Arab Emirates, Russia and Egypt among its patrons.

Foreign governments have flooded the oil-rich country with illegal arms. Last week, UN acting Libya Envoy Stephanie Williams warned that the build-up of advanced weaponry and influx of mercenaries is “further complicating local dynamics and chances of a future settlement.”

Earlier this year, a UN report said as many as 1,200 military contractors from Russian private security firm Wagner Group were operating in Libya to bolster Hifter’s forces. A recent US government watchdog report found Turkey had sent at least 5,000 mercenaries from Syria to fight on behalf of the GNA.