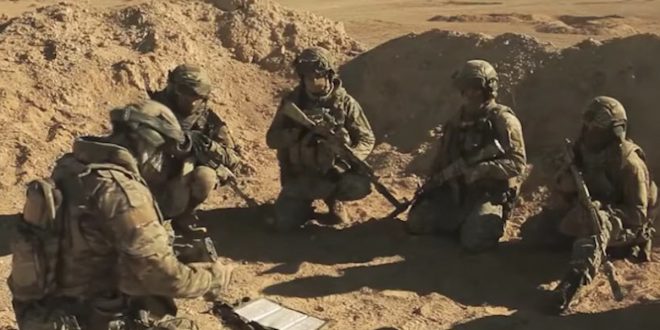 A military helicopter carrying four Russian fighters crashed in Sokna in central Libya, according to the UN-backed Government of National Accord (GNA).
They are believed to be working for Russia’s Wagner mercenary group, which has been fighting alongside the self-styled Libyan National Army (LNA), led by warlord Khalifa Haftar, against the Tripoli government.

GNA military spokesman Abdulhadi Dirah, told The New Arab‘s Arabic-language service that the helicopter crashed and exploded shortly after leaving a military base in the Sukna area, which lies 640 km south of Tripoli, as it headed for Al-Jufrah air base.

Dirah said he could not confirm any casualties among the four Russian passengers.

However the LNA said no casualties arose from the crash, claiming the helicopter landed due to a technical fault while on a reconnaissance mission.

A military sources close to the GNA said that the helicopter was transporting the mercenaries as part of a redistribution of Wagner fighters away from oil production areas towards the strategic area of Al-Jufrah.

Many, in recent weeks, have been anticipating an LNA offensive on the Libyan city of Sirte following reports that Haftar had been gathering troops and ammunition at nearby strategic positions, in spite of a fragile ceasefire.

The two warring parties have been battling for Sirte, the gateway to the country’s major oil export terminals and east, for months.

Last month, the GNA under Prime Minister Fayez Al-Sarraj declared a ceasefire and called for the lifting of a seven-month blockade on the country’s oil facilities.

While his statements were echoed by Aguila Saleh, head of the rival east-based parliament, Haftar’s LNA dismissed it as a “marketing stunt”, pointing to the mobilisation of rival forces around Sirte and Jufra, strategic areas for both sides.

A UN report published in May said that Wagner had up to 1,200 personnel deployed in Libya.

A later investigation by the same body found that Russian military logistic support to ChVK Wagner and other private security companies based in Russia had “significantly increased” from January 2020 to June 2020.