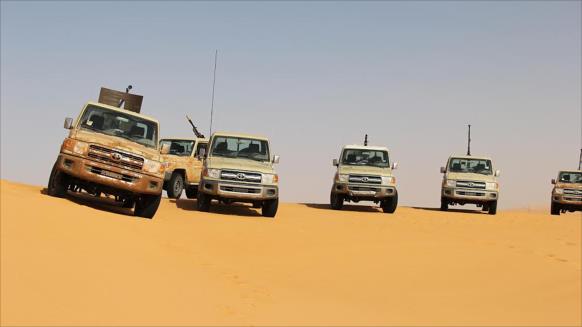 Explosions heard at Brak Shaati military base in south Libya

Sources from Brak Shaati in southern Libya told Libya Al-Ahrar TV Channel Saturday that explosions had been heard at the military base.

The sources added that a group of Russian Wagner Group mercenaries came from Jufra and entered Brak Shaati base, saying they had been working on securing the base.

The sources believed Wagner mercenaries had been making trials on different weapons inside Brak Shaati base as they continued to expand their presence from Jufra airbase toward the south, especially Sharara oilfield, Brak Shaati base and Temnehent airbase.

Meanwhile, Russia’s Wagner Group mercenaries suffered on September 23 a helicopter crash on Sokna road near Sabha. Four mercenaries were killed in the helicopter incident, which was followed by a US Secretary of State’s statement that said Washington had targeted a Russian network linked to the owner of Wagner Group that is doing malign activities in Libya and beyond.