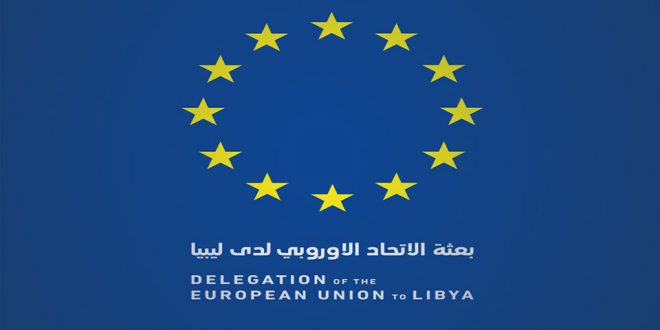 The European Union, in collaboration with the United Nations Office on Drugs and Crime (UNODC) and the United Nations Interregional Crime and Justice Research Institute (UNICRI), is launching a new project entitled “Building Libya’s National Capacity to Prevent and Combat Corruption and Money Laundering”, the EU announced yesterday.

The EU reported that the project will train Libyan authorities and law enforcement agencies to enable them to better combat corruption and financial crimes. Authorities will also be trained in techniques to trace, confiscate, and recover assets linked to such crimes. The project will last three years and is funded by the European Union with 2.5 million Euros.

The European Union said it is reinforcing its work with Libyan and international partners to strengthen transparency and accountability in Libya. This new project will be complementary to other initiatives financed by the European Union aimed at improving governance of national and local institutions, to contribute to fair and transparent management of public funds in Libya.

“This joint project is a testament to the shared commitment of the European Union, UNODC and UNICRI to support Libya in building long-term sustainable national capacities to counter corruption and money laundering. This new intervention supplements and expands UNODC’s long-standing partnership with Libyan Authorities in countering trafficking in persons and smuggling of migrants, related financial crimes and terrorism financing as well as in supporting prison reform.” stated Ms. Cristina Albertin, UNODC Regional Representative for the Middle East and North Africa, while welcoming the project.

Ms. Antonia Marie De Meo, UNICRI’s Director, highlighted that “Libyans have suffered from corruption for too long. They deserve accountability and transparency from all public officials. The Libyan people should also benefit from the recovery of stolen assets which – when recovered – can be directed to key public sectors such as health care and education.” UNICRI has already assisted the Government of Libya in tracing assets valued at hundreds of millions of US dollars, the statement added.

The press statement also said that through this new project, the European Union, in collaboration with UNODC and UNICRI, will strengthen the criminal justice system in Libya to investigate and prosecute corruption and related financial crimes.

The main project beneficiaries include the National Anti-Corruption Commission (NAAC), the Administrative Control Authority (ACA), the Audit Bureau, the Central Bank of Libya (CBL), the Financial Information Unit, the Ministry of Interior, the Office of the Attorney General, the Ministry of Justice, the National Economic Development Board (NEDB) and the Libyan Asset Recovery and Management Office.

Project experts will also work closely with civil society organizations and universities to enhance their capacity to prevent corruption and promote a culture of integrity and transparency in Libyan society, the statement concluded.