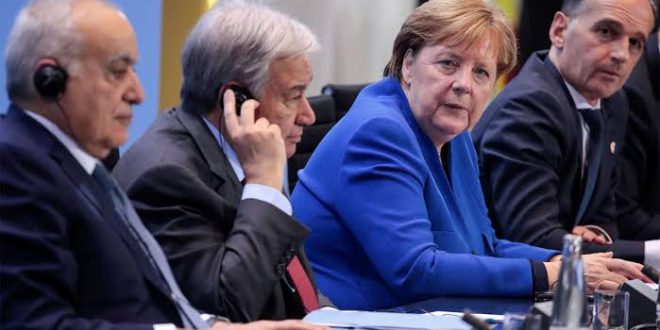 Key players to meet virtually to push for Libya ceasefire

The United Nations and Germany are co-chairing a ministerial meeting on Monday of world powers and other countries with interests in Libya’s long-running civil war in hopes of promoting a cease-fire between its rival governments.

Germany’s deputy U.N. ambassador Günter Sautter said Friday the virtual meeting is “an important follow-up” to a conference of the same parties in Berlin on Jan. 19 that approved a 55-point road map to peace in oil-rich Libya and agreed to respect a much-violated arms embargo, hold off on military support to the warring parties, and push them to reach a full cease-fire.

Stephanie Williams, the top U.N. official for Libya, warned last month that the conflict-torn North African country is at “a decisive turning point,” with foreign backers of its rival governments pouring in weapons — in violation of the Berlin agreement — and the misery of its people compounded by the coronavirus pandemic.

He pointed to “some encouraging developments in Libya” including talks on security, “the long-term agreements on transition, and progress on the question of oil exports”.

In the years after the 2011 uprising that toppled longtime autocrat Moammar Gadhafi, Libya has sunk further into turmoil and is now divided between two rival administrations, based in the country’s east and west, with an array of fighters and militias — backed by various foreign powers — allied with each side.

But Hifter’s campaign collapsed in June when militias backing the U.N.-supported government in Tripoli, with Turkish support, gained the upper hand.

Haftar is supported by the United Arab Emirates, Russia, Jordan and Egypt while the Tripoli forces are supported by the wealthy Gulf state of Qatar and by Turkey, a bitter rival of Egypt and the UAE in a broader regional struggle over political Islam.

“We hope that they will call on the parties to accelerate efforts to achieve a cease-fire,” Sautter said.

“We hope that continuing blatant violations of the arms embargo will end.”

U.N. experts monitoring sanctions against Libya said in a report, seen by The Associated Press last month, that the arms embargo was being violated by both sides and their foreign backers, and remains “totally ineffective”.

They said 11 companies also violated the arms embargo, including the Wagner Group, a private Russian security company that the panel said in May provided between 800 and 1,200 mercenaries to Haftar.