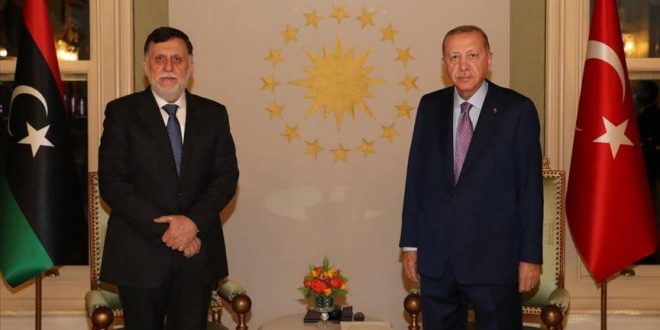 President Recep Tayyip Erdogan on Sunday expressed “full solidarity” with Libya’s UN-recognised Government of National Accord (GNA) during a meeting in Istanbul, his office said.

Erdogan met with the head of the Tripoli-based government, Fayez al-Sarraj, who last month announced plans to step down within six weeks as part of efforts to broker a peace agreement.

Turkey backs the GNA, providing military support following an April 2019 offensive on Tripoli by rival strongman Khalifa Haftar, and helped turn the tide in the conflict earlier this year.

The GNA earlier this year repelled a deadly offensive on Tripoli by Haftar.

“President Erdogan stated that Turkey would continue to stand by Libya in full solidarity and strengthen relations with the Goverment of National Accord, the only legitimate representative of Libya,” the presidency said.

The last meeting in Istanbul came less than a month ago when Sarraj visited the city on September 6.

The Tripoli-based government and a parliament in the eastern city of Tobruk linked to Haftar agreed in August on a ceasefire and elections by March.

After recent talks between the two sides in Morocco, Sarraj said he was willing to step down as a new government comes together.

Turkey signed two deals with the Tripoli government on security and maritime boundaries.