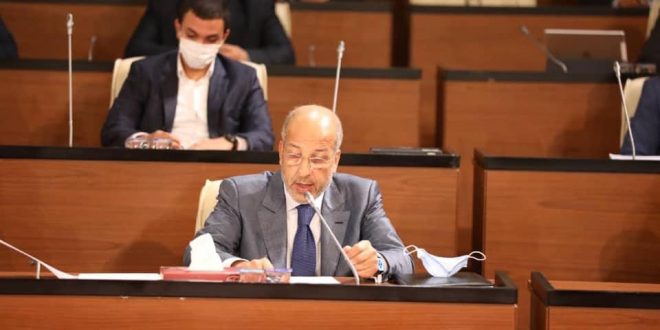 Al-Kabir, in a briefing at the Tripoli-based House of Representatives, said the general debt of the state reached a record high of 270% of the Gross Domestic Product (GDP), adding that Libyan oil revenues dropped dramatically from 53.2 billion dollars in 2012 to almost (Zero) 2020.

He said this led to the shelving of economic reform in 2018 and 2019, adding that Libya lost over 180 billion dollars in oil blockade, which is “a bullet in the head.”

Al-Kabir also warned that the suspension of oil production and exports would be catastrophic to the state amid the unprecedented decrease of CBL reserves and plummeting oil prices globally, saying Libya should work immediately to increase oil output to reach 1.7 million barrels per day to cover the basic expenditures of the state.

“The efforts of the CBL and Audit Bureau led to a decrease in 2020 monetary arrangements from 51 billion dinars proposed by the Ministry of Finance with 40 billion dinars deficit  to 38.5 billion dinars – a drop of 13 billion and deficit of 27 billion.” He said.

Al-Kabir added that the parallel CBL in eastern Libya printed 15 billion dinars in Russia and used it to fund the parallel government’s expenditures there. It also made some new systems that led to a surge of commercial banks’ accounts reaching 43 billion dinars, but they can’t use the money to give their clients what they rightly ask for.

“Not to mention that the Commerce and Development Bank gave a direct loan of 6 billion dinars to Haftar’s forces.” He explained.