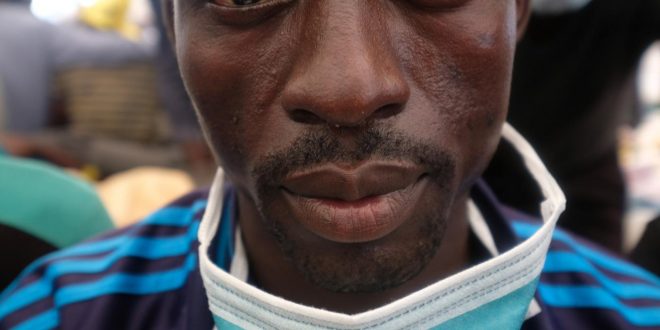 Surviving the sea: A Ghanaian coffin-maker’s dangerous journey to Europe

It was just before dawn on 11 September when Stephen Donkoh was rescued alongside 113 people off the coast of Libya. They had already spent two days and three nights adrift on a rubber dinghy when the Open Arms humanitarian rescue vessel spotted them in the pitch-dark night. Many said it was a miracle.

Once on deck, Donkoh and the others were guided through the complex obstacle course of Covid-19 health protocol: “Leave the life-vest here and put your feet on that tray with chlorine over there,” one volunteer on board repeated 114 times for each person rescued; a second volunteer distributed hand sanitiser before checking the temperature of the newcomers and making sure all wore a mask properly.

Paola Tagliabue, the doctor on board, found no symptoms of coronavirus among Donkoh’s travel mates and the other 162 individuals already on board from two previous rescues.

“When do we get to the port?” was the most recurrent question on board. Nobody, not even the ship’s captain, knew the answer.

There had been repeated requests to both Malta and Italy to provide a port of safety, as international law dictates that the closest port has to grant permission to entry immediately. But there was no answer yet. Meanwhile, the exhausted migrants had to cope with the heat and smells on an overcrowded deck, trying to find some space could squeeze their bodies into to be able to sleep.

On the 37-metre-long Open Arms, tensions ran high. A Ghanaian called Frank was sure Egyptians had stolen his mobile phone; Ahmad also exploded when he found out someone had taken both his blanket and his tiny sleeping space in the stern.

“Isn’t anyone going to listen to me?” he yelled right next to Sasudone, a 50-year-old Nigerian who was visibly fed up with the Somali teenagers constantly asking for a smoke.

Although rare, there were also moments of peace. A human circle immediately formed around Donkoh when he produced a set of pictures that had miraculously survived both the voyage at sea and the mess on deck.

Everybody looked in awe at the photographs illustrating Donkoh’s unconventional craft, a collection of fantasy coffins custom-made for the deceased: one was shaped like an airplane, made for a pilot; another was a tiger for an old hunter. There was a tuna fish for a fisherman, a car for a taxi driver. The initial amazement shaped into admiration among the little audience. Stephen Donkoh was truly an artist.

Among the 276 people rescued by the Open Arms, the story of the Ghanaian coffin-maker speaks of life and death in a sea of uncertainty for those seeking to reach Europe via the Mediterranean Sea.

Traps along the way

“I always carry these with me to introduce myself to potential clients so that they can see my work,” the Ghanaian said of the photos.

Fantasy coffins, also called figurative or proverbial coffins, are a deeply rooted tradition in the Accra region of Ghana. For the Ga people, one among dozens of ethnic groups in the country, death is not the end but an extension of life as it used to be.

Donkoh emphasised that it is mostly about the deceased being remembered for what they did in life, although the belief that ancestors are much more powerful than the living is also highly present. Accordingly, coffins also work as a kind of appealing casing which should give clues about the newcomers to the afterlife.

Despite being popularised back in the 1950s, fantasy coffins are far from being something a regular Ghanaian can afford. Donkoh said a child’s coffin can cost around $2,500, an adult one around twice that amount.

The Ghanaian started working in carpentry at a very early age through his father. He would have liked to continue his studies after finishing primary school, but money was tight at home.

He spent a few years building roofs with his father until 2003, when he enrolled as an apprentice with Pauliam, a well-known custom-coffin maker in Ghana. The Donkohs could finally make ends meet. Stephen got married in 2005 and fathered five children, but his dream of making it on his own was still unfulfilled.

One day in the spring of 2019, a fellow Ghanaian man showed up at his studio in Accra and told him he could make a lot of money in Libya with his skills. It took Donkoh only a few days to say goodbye to his family and hit the road north: he crossed Togo and Benin, and then the implacable Sahel desert in Niger until he reached Libya. The Ghanaian man was waiting for him in Khoms, 40km east of Tripoli.

But it was all a trap.

“Not only was there no work in the custom coffins field; I even ended up being forced to work for this man in construction without seeing any money,” Donkoh told his audience, which was all ears despite the constant noise on deck.

He eventually managed to run away from his captor before his path crossed that of a Libyan who offered him a passage on a ship to Europe for $300. But it was another trap: after several days waiting inside a house by the beach until weather conditions improved, Donkoh ran to the shore in the middle of the night, only to discover that the promised ship was nothing more than a rubber boat. How could it possibly accommodate over 100 people?

“They forced me to jump on it at gunpoint. They told me that they would kill me on the spot if I didn’t,” he said, this chapter of his story echoing the experience of most aboard the Open Arms.

Residents of Palermo in Sicily who enjoy a view of the sea might have witnessed the scene in the early morning of 18 September, when dozens of migrants began jumping overboard from the Open Arms. It had already been 10 days since the first rescue operation was conducted, but neither Malta nor Italy had responded to requests for a port of safety.

The shores of Palermo were less than a mile away; one could even see locals strolling by the sea or smoking nonchalantly on their balconies. Almost half of the migrants on board decided that swimming would be the fastest way to touch land.

“When are we going to disembark? Tell me when and I’ll stay,” an Ivorian yelled at one of the volunteers who was struggling to contain the crowd. While some took a chance to swim ashore, Donkoh decided to stay on board, as did the majority of Ghanaians

“Will they have problems with the police?”; “Will they send them back to their countries?” many asked, their eyes fixed on those being rescued by Italian coastguards. “When will we finally disembark?” was, yet again, the most pressing question.

The answer came that night at 12:46am: maritime authorities in Palermo requested that the Open Arms prepare its passengers for a transfer to a quarantine ship “within the next few hours”. The remaining 140 migrants burst with joy, as did the crew.

“It has been a real challenge and, above all, a very hard mission,” said Albert Mayordomo, the 38-year-old Catalan who led the rescue mission. “These people had already suffered a lot of violence, and they were exhausted. The constant refusal from both Malta and Italy to give us a port of safety throughout these days only boosted the feeling of uncertainty among them.

“They were asking for a solution that we couldn’t give, and we couldn’t lie to them either,” he said from the bridge, still wearing his mask. He labelled the tension experienced on board as “unprecedented” among the 76 rescue missions conducted to date by the Catalan NGO bearing the same name as the ship.

Mayordomo denounced “an administrative offensive” directed against the humanitarian rescue fleet. The German-run Seawatch 4 was impounded by Italian authorities in Palermo after its last rescue mission last month. But perhaps the most flagrant recent case might be that of the Maersk Etienne. After rescuing 27 migrants in Maltese waters in early August, the cargo ship had to wait for six weeks until it was finally allowed to dock in Sicily.

Figures corroborate the success of the European blockade. According to data gathered by the International Organisation for Migration (IOM), over 20,000 migrants have managed to reach Italy so far this year, only a third of the 2019 total.

The number of people confirmed to have died at sea this year exceeds 400, and is likely much higher. In a report released on 13 September, international NGO Doctors Without Borders (MSF) denounced “a deliberate policy to not save lives,” with Malta and Italy ignoring distress calls and delaying rescues.

Donkoh made it aboard the GNV Allegra, one of five ferries rented out by the Italian government for migrants to spend the two-week quarantine due to the pandemic.

Two days later, on 20 September, the Giornale de Sicilia newspaper echoed the statements from Nello Musumeci, president of the Sicily region, claiming that there were 60 cases of coronavirus among the migrants who had been aboard the Open Arms. However, neither the Red Cross nor other official institutions have issued statements about any cases on board.

Such statements, coinciding with the Italian regional elections, have led some to believe that Sicily’s conservative leader was using fear-mongering about migrants´arrival for electoral purposes.

Meanwhile, Italian prosecutors are investigating the death of Abou Diakite, a 15-year old Ivorian who was also brought to Palermo by Open Arms. The teenager was malnourished, dehydrated and possibly suffering from a kidney infection, according to the staff of Emergency,  an NGO, aboard the rescue ship,

Despite the file handed by the Italian NGO, Diakite was kept on the quarantine ship until 30 September, when he was ordered to be transferred to a hospital in Palermo. But it was already too late for the teenager. He died two days later.

Donkoh is now out of quarantine. The Ghanaian carpenter is aware that his skills as a fantasy coffin maker likely won’t be put to use in Europe but, he says, “a good carpenter is always needed”.

After surviving a potentially deadly journey on a boat, Donkoh didn’t hesitate for a second when asked what model of coffin he would choose for himself:

“A woodworking hand-plane, of course!”