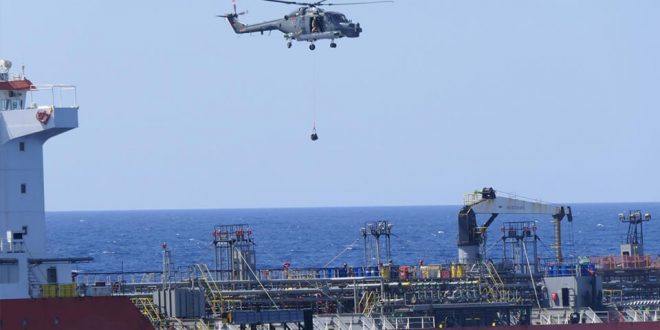 Operation EUNAVFOR MED Irini reported yesterday that it had boarded and inspected on Tuesday the Merchant Vessel (MV) MEDKON SINOP in application of the United Nation Security Council’s Resolution 2292 of 2016 concerning the arms embargo on Libya.

Operation Irini, launched on 31 March, is a part of the EU’s commitment to support the Berlin process, restore stability in Libya and bring peace to its population.

This is only the second boarding since the start of the Operation. On 10 September IRINI reported that it had boarded and inspected the Merchant Vessel Royal Diamond 7 early in the morning for suspected violation of the UN arms embargo on Libya. The boarding team of an Irini ship boarded the vessel at 7 a.m. in international waters, 150 km north of the Libyan city of Derna (Cyrenaica).

IRINI reported the MV MEDKON SINOP is a Panama flagged General Cargo vessel and departed from Ambarli in Turkey on 18 October and was heading to Misrata in Libya.

It said the boarding team of the French Frigate Latouche-Tréville, acting in the framework of Operation EUNAVFOR MED IRINI, boarded the vessel in international waters, 135 nautical miles North of Benghazi, Libya. The boarding team examined the available documentation on board and inspected the cargo (in containers) on a random basis.

It reported that nothing suspicious was found and the boarding team returned to its unit allowing the vessel to proceed on its way. It said the procedure went smoothly and the boarding took place in a collaborative atmosphere of both the master and the crew. All recommended COVID-19 precautions were observed during the boarding.

IRINI reported that from 4 May, when it started its activity at sea, its assets have patrolled the central Mediterranean and performed 990 hailings and made 33 friendly approaches (visits on board of merchant vessels). The Operation has monitored suspect vessels at sea in more then 16 ports and landing points.

It also says that by monitoring 25 airports and landing strips, it detected 120 suspect flights possibly carrying military related cargos back and forth to Libya.

Irini also says it is contributing to the UN arms embargo and the prevention of oil smuggling with 16 special reports to the United Nations Panel of Experts concerning both sides of the conflict in Libya, in an impartial manner. These results were possible thanks to SatCen (European Union Satellite Centre), which provided more than 298 sets of satellite images at Irini’s requests.

However, IRINI has come in for a huge amount of criticism with the widely acknowledged amassing of weapons and mercenaries in Libya at the Wiyia base and along the de facto temporary Sirte-Jufra ceasefire line by both warring Libyan sides – seen as evidence of its failure.

It has also been reported that IRINI was refused boarding rights to some ships approaching the Libyan coastline – believed to be transporting weapons.

The operation is also criticised for failing to stop tens if not hundreds of cargo flights into Libya, for both sides, believed to be transporting weapons. Moreover, critics say that EU and NATO members are among states that have broken the UN Libya arms embargo.

His government’s press statement on IRINI said ”With regards to the European operation IRINI to implement the arms embargo on Libya, Serraj said that this operation did not stop the air bridge to transport weapons, equipment and mercenaries to the other (Hafter’s) side, and that there are countries that say that the operation produces positive results, while the reality, he added, confirms the contrary”.