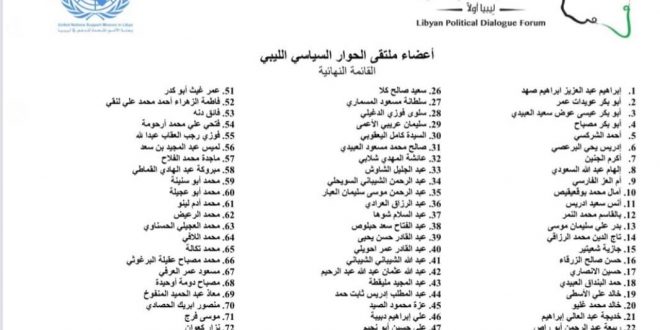 The list of 75 people selected by UNSMIL to participate in the Libyan Political Dialogue Forum has come in for some criticism. The virtual edition of the LPDF kicked off today with the face-to-face edition planned to start on 9 November in Tunis.

The LPDF follows on from the announcement of the signing of an official permanent ceasefire across Libya on 23 October by the two waring Libyan factions.

UNSMIL said it had selected the 75 participants ‘‘from across Libya representing all segments of Libyan political and social society’’. It explained that the participants ‘‘were selected from different categories, based on the principles of inclusiveness and equitable geographical, political, tribal and social representation. This group includes representatives of the House of Representatives and the Supreme Council of state, as well as political actors outside the two institutions, and with a firm commitment to the meaningful participation of women, youth and minorities so that the dialogue is inclusive of all the spectrums and components of the Libyan people’’.

However, and unsurprisingly, the list has drawn criticism with some particular personalities deemed too ‘‘pro-Qaddafi’’, too ‘‘Islamist’’, too ‘‘pro Hafter’’, too ‘‘old guard’’ or ‘‘a recycling of old failed faces’’ from the General National Congress (GNC) era. It was also criticised by some pro-Tripoli government militias.

The list was criticised for being non-proportional and non-reflective of Libya’s population and of over representing some groups at the expense of others.

UNSMIL was particularly criticised for playing politics by only publishing the list of participants on the eve of the start of the virtual edition of the LPDF – thereby not allowing enough time for the general public to register its feedback to the list.