Home / Normal / Libya: ‘We are committed to cooperation with Turkey’

Libya: ‘We are committed to cooperation with Turkey’

The Libyan Minister of Defence Salah Al-Namroush affirmed the government forces’ adherence to the ceasefire announced in Geneva, while reiterating his country’s commitment to agreements and joint cooperation deals signed with Turkey.

In a series of tweets, Al-Namroush said that “the initial memorandum (the 5 + 5 Joint Military Committee) did not include a military cooperation accord with Turkey.”

He added: “We confirm maintaining joint cooperation with the Turkish ally and the continuation of present and future training programs directed to the affiliates of the military facilities of the Government of National Accord’s Ministry of Defence.”

The Libyan official stated that “cooperation in the fields of security and military training for our forces has absolutely nothing to do with the ceasefire agreements.”

Al-Namroush continued: “Our forces are committed to the truce mediated by the international community, but the war criminal [Khalifa] Haftar has tried to violate the ceasefire since the previous armistice agreement more than eight times, and he is still mobilising forces, transferring mercenaries and fortifying his camps.”

He asserted: “We affirm our rejection of any solution that includes the war criminal Haftar, as we will pursue and hold him accountable along with all those who shed the blood of Libyans and plundered their possessions.”

In the face of warlord General Khalifa Haftar’s aggressions, Ankara and the Tripoli-based internationally recognised government last year reached two memorandums of understanding (MoU), one on military cooperation and the other on the maritime boundaries of countries in the Eastern Mediterranean.

The GNA was founded in 2015 under a UN-led agreement, but efforts for a long-term political settlement failed due to a military offensive by forces loyal to Haftar. The UN recognises Fayez Al-Sarraj’s government as the country’s legitimate authority, however it has been locked in battle against Haftar’s militias since April 2019 in a conflict that has claimed thousands of lives. 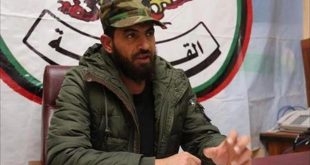