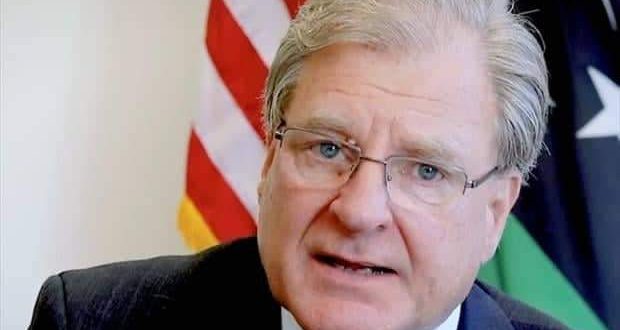 US embassy threatens sanctions against obstructors of Libyan dialogue

The US ambassador Richard Norland has welcomed the courageous efforts of Libyan participants in the Joint Military Commission (JMC) consultations in Ghadames to implement the October 23 ceasefire agreement, realize Libyan aspirations to deescalate the conflict, and begin to take concrete steps toward the ultimate departure of foreign forces and mercenaries.

The US embassy said in a statement that this important trajectory will continue when a broad and representative group of Libyans gathers in Tunis beginning on November 9 for the UN-facilitated Libyan Political Dialogue Forum (LPDF), which aims to finalize a roadmap to national elections through which all Libyans would exercise their sovereign and inalienable right to choose their future through democratic means.

The US embassy added that it was encouraged that the overwhelming majority of Libyans are working in good faith to seize these historic opportunities for Libya to restore its sovereignty and achieve a brighter future.

“Regrettably, however, a small group of Libyans, in concert with certain external actors, is instead seeking to undermine the UN-facilitated dialogue, plunder Libya’s wealth, and prioritize personal ambitions over the well-being of the nation.” The US embassy said.

It indicated that it stands with those Libyans who reject violence, oppose foreign manipulation, and come together in peaceful and patriotic dialogue.

“We remind those who would stand in the way of progress that they remain at risk of sanctions.” It added.