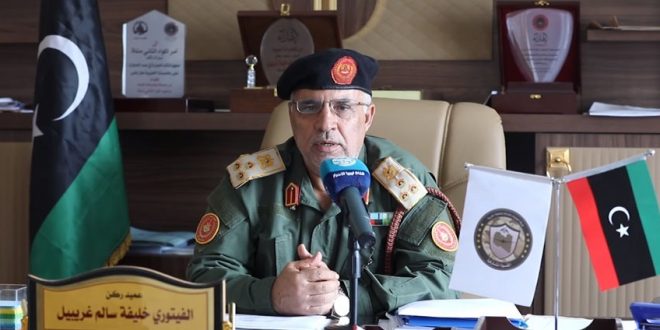 The member of the Military Joint Commission of 10 for the Government of National Accord (GNA) Al-Fituri Ghribil said all forces will be withdrawing from Sirte and Jufra gradually as the two areas are considered lines of contacts according to the latest agreement made by the two parties in Ghadames and before that in Geneva.

Ghribil told local media on Wednesday that the gradual work of the committees will focus on the withdrawal of foreign mercenaries first as in addition to the heavy weapons until all forces return to their previous positions as before April 04 2019; Khalifa Haftar’s war on Tripoli.

Ghribil indicated that the area to be covered by the joint force after the withdrawal of the forces will be from south Soukna – Fuqahaa Checkpoint – to Abu Grein westward and Ben Jawad eastward.

Ghribil said the joint police force from all across Libya will be tasked with securing the area from which the forces will pull out, adding that all forces will be withdrawing from the regions, cities and towns in which there were armed conflicts across the country; starting with Sirte and Jufra.

He explained that the forces from Benghazi, Misrata and Tripoli will all return to their previous positions as before the war.

Ghribil said the Joint Ministry Commission will be securing the areas from which all forces withdraw in cooperation with the joint police force, saying the military commission will have two headquarters in Sirte and Jufra.

He remarked that the military commission of 10 will be in Sirte and Jufra with the branch committees to monitor the withdrawal and report on the implementation of the ceasefire and withdrawal agreement.