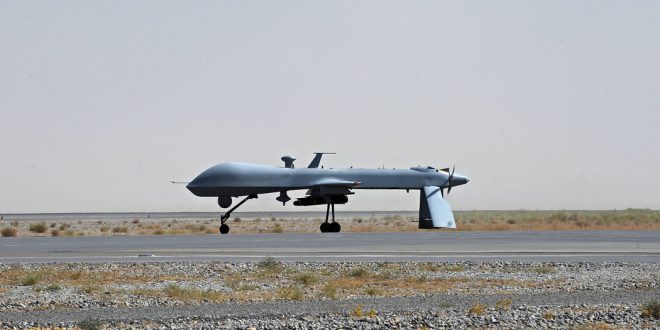 Amnesty International has called on the United States to stop the sale of 18 sophisticated armed MQ-9B aerial drones to the United Arab Emirates (UAE), in light of evidence that civilians are being killed during attacks in war-ravaged Yemen and Libya.

Philippe Nassif, the advocacy director for the Middle East and North Africa at Amnesty, said in a statement on Monday that the US risked “complicity in likely war crimes in Yemen”.

“The startling fact that the United States government continues its unflinching support of providing weapons that risk adding to the devastating toll of Yemeni civilians… should shake to the core every person living in this country,” Nassif said.

“The United States must resolutely refrain from supplying weapons that could be used in the conflict and not transfer weaponry to the UAE, or risk complicity in likely war crimes in Yemen.”

The US State Department gave Congress notification of the planned $2.9bn sale last week, and the move comes on the heels of a previous notification of a potential sale of F-35 fighter jets to the UAE.

The nearly $3bn sale would mark the first armed drone export since the Trump administration reinterpreted a Cold War-era arms agreement between 34 nations to allow US defence contractors to sell more drones to allies.

“These US drones could be responsible for UAE attacks that violate international humanitarian law and kill, as well as injure, thousands of Yemeni civilians already bearing the brunt of one of the world’s most devastating humanitarian catastrophes,” Nassif added.

Alarmed by the rise of a group they saw as an Iranian proxy, Saudi Arabia, the UAE and seven other Arab states launched a military campaign in March 2015 to roll back advances by the Houthis, a group traditionally based in the country’s north who toppled the internationally recognised government months earlier.

Since then, the coalition has carried out more than 20,000 air attacks, with one-third striking non-military sites, including schools and hospitals, according to the Yemen Data Project.

In recent years, Abu Dhabi has moved to support the Southern Transitional Council, which has been fighting forces loyal to exiled President Abd Rabbuh Mansour Hadi.

The protracted conflict has seen more than 100,000 people killed, an estimated four million displaced, and left 80 percent of the country’s 29 million people dependent on aid for survival.

The UN has declared it the “world’s worst humanitarian crisis”, as heavy artillery and air strikes have hampered access to health care and increased pressure on the few facilities that are still functioning.

Amnesty also said that it acquired extensive evidence that the UAE used armed drones in Libya, in breach of a longstanding UN arms embargo.

“Drones have been used to target civilian homes and health facilities, including field hospitals and ambulances,” Amnesty said, referring to Libya.

Libya has been wracked by violence since 2011 when a Nato-backed uprising overthrew longtime ruler Muammar Gaddafi. Since then, multiple foreign powers have become involved in the country.

Following disputed elections in 2014, the country has been divided between competing administrations, with the UN-recognised GNA supported by Turkey, while the UAE and Egypt have backed forces loyal to Haftar.