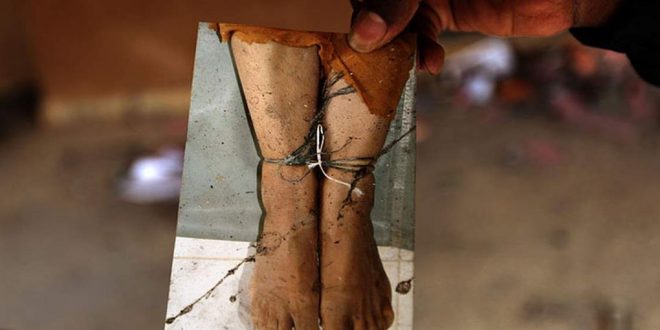 A sense of impunity has fueled rampant torture by militias and armed groups affiliated to the Libyan Government of National Accord (GNA) and rivals with de facto control of territory because of real or perceived family, tribal, political or regional affiliations, Amnesty International said ahead of Libya’s review at the UN Human Rights Council on 11 November.

The organization is calling on states to use Libya’s Universal Periodic Review (UPR) to recommend to the Libyan authorities that they protect all detainees from torture and other ill-treatment, investigate all incidents of death and torture in custody, and hold perpetrators accountable.

“Rampant torture has long plagued Libya, but the circulation of videos depicting abuse reflects just how emboldened perpetrators have become. The international community must use Libya’s human rights review at the UN Human Rights Council to denounce the country’s shameful record of torture and break the cycle of impunity,” said Diana Eltahawy, Deputy Regional Director for the Middle East and North Africa at Amnesty International.

“We continue to gather harrowing evidence of the widespread use of torture in Libya by members of militias and armed groups against protesters, perceived opponents, family members of opposing fighters, refugees and migrants. People have been severely beaten, sexually abused, bound in stress positions and humiliated – all with complete impunity,”

The scale of the problem is illustrated by the videos depicting torture being publicly released, sometimes live on Facebook. They at times feature the faces of perpetrators and victims, yet officials or those in control of the forces responsible take no steps to investigate, prosecute.

Video footage livestreamed on Facebook on 23 September 2020, verified by Amnesty International, showed a man screaming as he is mocked and humiliated while suspended by his arms from a metal pipe. Informed sources told Amnesty International that the video was livestreamed on the personal Facebook page of a commander in the 80th Border Guard Brigade, an armed group from the northwestern city of Zintan with shifting allegiances to the warring parties. The video was later removed from his Facebook page. No investigation has been conducted and he remains active.

Militias and armed groups regularly abduct and torture critics and rivals, or those they deem to be opponents due to their family, tribal or regional connections. Some victims have died from injuries sustained as a result of torture.

Men from the 128th Brigade, a group affiliated with the self-styled Libyan Arab Armed Forces (LAAF), also known as the Libyan National Army (LNA), abducted Tarek Abdelhafiz from in front of his shop on 26 June 2020, according to information collected by Amnesty International. He was detained at the brigade’s base in the southwestern town of Houn, where he was severely beaten, suspended for prolonged periods and deprived of food and water. His lifeless battered body was thrown in front of a hospital in the town two weeks later. Photographs of his body, the preliminary medical report and the autopsy report, examined by Amnesty International are consistent with the information indicating that he was subjected to severe beatings and suspension by the wrists.

The Brigade’s commander refused to give reasons for his arrest or present him to judicial authorities. Tarek Abdelhafiz’s brother Ahmed was snatched in September 2019. His exact fate and whereabouts remain unknown.

Relatives of opponents and fighters are also being targeted in retaliation for the supposed crimes of their family members. The bruised body of Bassem el-Melety was discovered hours after he had been taken from his house in the town of Tarhouna on 31 October 2020, according to information gathered by Amnesty International.

He was taken by armed men from the Tarhouna Security Directorate support force, a militia aligned with Libya’s GNA. On 2 November 2020, the group had confirmed arresting 32-year-old Bassem el-Melety in a Facebook post, alleging his brother, a purported member of the al-Kaniat armed group aligned to the LAAF, was responsible for crimes in Tarhouna. They claimed Bassem el-Melety had suffered from chronic illnesses and had died while they were detaining him. The post was later deleted. Informed sources told Amnesty International that he had no serious illnesses or medical conditions prior to his arrest.

This is not the first retaliation by GNA-affiliated militias against family members of fighters allied to the LAAF in Tarhouna and other parts of western Libya. Amnesty International documented several such cases in June 2020.

Refugees and migrants also are routinely tortured. They are systematically abused by militia members, armed groups and traffickers, as well as by officials from the Department for the Combat of Illegal Migration (DCIM), under the GNA Ministry of Interior, while in custody. Former detainees told Amnesty International that DCIM guards would regularly beat them for complaining about their conditions, “talking back” or sometimes for no apparent reason at all.

The Libyan government stated in its 2020 report to the Human Rights Council that the country’s legal system is already consistent with international human rights law. But the report failed to give any details on steps taken to put an end to systematic torture or hold perpetrators accountable.

“Members of the Human Rights Council should also call on Libyan authorities to fully cooperate with the recently established Independent Fact-Finding Mission on Libya to investigate violations and abuses of human rights and international humanitarian law, including torture, and with the International Criminal Court in their investigations,” said Diana Eltahawy.