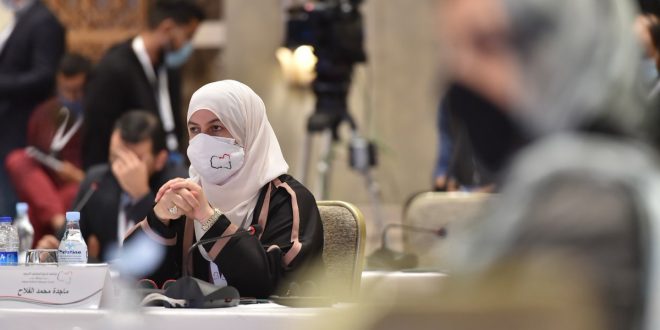 Around 17 Libyan women participating in the Libyan Political Dialogue Forum (LPDF) in Tunisia have demanded in a joint statement to allocate one of the two deputy prime minister posts to a woman.

“Such a step would consolidate the principle of women’s participation in decision-making positions and activate their role in nation-building,” the statement read.

They further called for greater involvement of women in the executive authority and in leadership positions by at least 30%, taking into account standards of competence, technical expertise, academic qualification and, integrity.

“The formation of the government must be based on efficiency, merit, a fair representation of political and geographical diversity, the participation of cultural components, and a true representation of youth, which should not be less than 20% in leadership positions,” the statement added.

The LPDF women participants called for the restructuring and activation of the Women’s Empowerment Unit by appointing three experienced women in the unit to work on a proposal concerned with establishing a council for women with an independent functionality.

They also underscored the need for action to address and eliminate discrimination against women and provide psychosocial support services, as well as personal protection when needed.

Gender and SecurityPolitical Transition
All
2020-11-15
asaeid
Previous Three political blocks in Libya insist: constitutional referendum must be held before the polls
Next Libya talks pause without naming transitional government