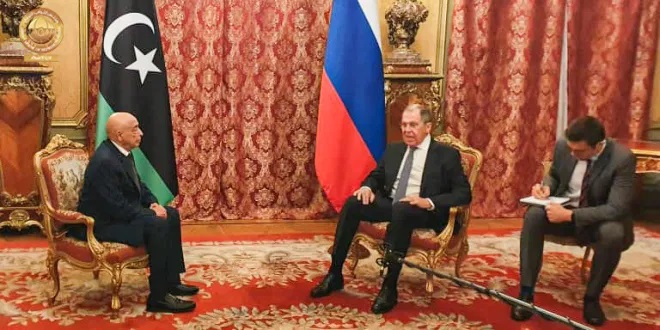 Invited by the State Duma, the lower chamber of the Russian parliament, the chairman of the Tobruk-based parliament arrived in Russia on an official visit yesterday and was welcomed upon arrival by Russian Foreign Minister Sergey Lavrov.

The Russian Minister told Reprenstative Saleh that Russia is prepared to resume full bilateral cooperation with Libya in every aspect.

“The sooner post-conflict settlement is completed and normal post-conflict life begins, the quicker we will be able to resume bilateral cooperation in all areas,” Lavrov said. “We are interested in resuming other forms of contact as well, such as parliamentary exchanges.”

Lavrov stated that he expects the visit by the Head of the Tobruk based HoR to be useful in every aspect in relaunching the political process in Libya and that he welcomes Saleh’s efforts in that regard.

“Your meeting with Fayez al-Sarraj this August played an important role in restarting the political process. Despite certain difficulties, the process continues, and gains momentum,” the Russian foreign minister added.

Leverov also noted that Russia is fully prepared to resume cooperation with Libya in every aspect, including energy, transportation, and economic and investment projects in general

Russia’s top diplomat emphasised that Russia’s interest is to see Libya’s return to normal life and reestablish peace for the Libyan people who have endured nearly a decade’s worth of conflict.