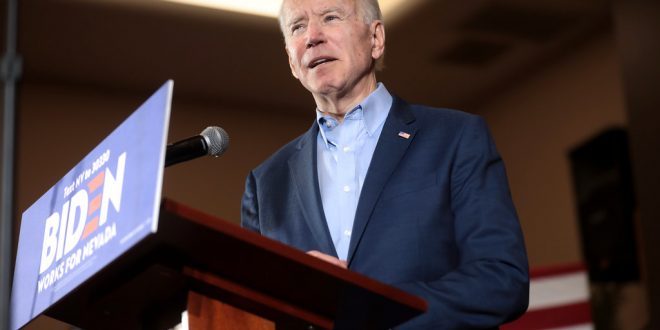 The UN-recognised government in Tripoli and its US allies are banking on the incoming President-elect Joe Biden administration to ramp up Washington’s focus on Libya and deal a death blow to the political ambitions of eastern commander Khalifa Haftar.

Lobbyists for the Government of National Accord (GNA) and Libyan-American advocates are pursuing a multi-tiered campaign that includes stepping up US diplomatic engagement, congressional pressure on human rights and legal action against Haftar.

The 67-year-old’s influence in the US has largely dried up amid battlefield reversals and war crimes lawsuits in US courts. GNA Prime Minister Fayez al-Sarraj rushed to congratulate Biden and Vice President-elect Kamala Harris soon after major news outlets called the election, to share his “aspiration to work with them to achieve a civil democratic state in Libya”.

Meanwhile, the Libyan American Alliance, a Virginia-based advocacy group that supports the GNA, is preparing a white paper for the incoming administration that should be ready within a couple weeks.

A key message to the Biden camp will be that Haftar “is no longer a part of Libya’s future”, said Esam Omeish, the group’s president.

“I think we need to have clarity from the Biden administration in voicing that.”

They hope that Biden–who as vice president in 2011 argued against the Nato-led intervention against longtime autocrat Muammar Gaddafi and mourned the attack that killed ambassador Chris Stevens and three other Americans in Benghazi the next year–will give the conflict the attention it deserves amid his expected focus on domestic issues including the Covid-19 pandemic and the struggling economy.

“They want the US to engage on Libya in a way they haven’t since Chris Stevens’ murder and they understand that the US has limited bandwidth,” Lawrence said.

“As with everything in Washington, it’s often just, how to put your country or your issue at the top of everybody’s to-do pile. And they really have to do it during the transition to hit the ground running on your issue. That’s why all this intense lobbying is starting now.”

The current lobbying effort traces its roots back to early April 2019, when Haftar and his self-proclaimed Libyan National Army (LNA) launched their assault on Tripoli.

Haftar has enjoyed the support of countries including Saudi Arabia, Egypt and the United Arab Emirates, which see him as a bulwark against perceived Muslim Brotherhood influence in the GNA.

While the US government opposed the incursion, President Donald Trump caused a stir when he spoke by phone with Haftar on 15 April 2019.

A White House readout of the call said the US president “recognized Field Marshal Haftar’s significant role in fighting terrorism and securing Libya’s oil resources, and the two discussed a shared vision for Libya’s transition to a stable, democratic political system”.

The readout made no mention of the offensive on Tripoli.

Not to be outdone, Haftar’s army hired Linden Government Solutions for the same rate the following month.

The Libyan American Alliance was launched around the same time. In its first public event at the National Press Club on 26 June 2019, the group announced that four Libyan families had filed suit against Haftar in Virginia district court for alleged war crimes committed during his offensive on Tripoli.

The families are seeking $125m in damages from Haftar, who used to live in Virginia and holds US citizenship. Advocates also pushed for a congressional hearing that was held on 15 May 2019. That day, seven House members from both parties sent a letter to Attorney General William Barr and FBI Director Christopher Wray, calling on them to investigate war crimes allegations against Haftar and his subordinates.

Congressional action continued with the introduction of legislation from Representative Ted Deutch (D-Fla.) and Senator Chris Coons (D-Del.) that called for US sanctions and assistance.

That bill, the Libya Stabilization Act, finally passed the House of Representatives last week but has not moved in the Senate.

The bill notably seeks a report on arms embargo violations by GNA allies Turkey and Qatar, as well as by the UAE, Russia, Egypt, Sudan, Chad and Saudi Arabia, all of which support Haftar.

The Trump administration, meanwhile, ramped up its involvement around September 2019 amid reports that Russia was sending mercenaries to help Haftar.

US engagement has continued. This January, Secretary of State Mike Pompeo attended the UN-backed Berlin summit that helped relaunch the political process in Libya.

The conference endorsed a three-track approach: a security track aimed at achieving a cease-fire and removing foreign fighters from the country; a political track calling for negotiations between rival authorities in Tripoli and Benghazi alongside independent actors, and an economic track charged with tackling reforms including the distribution of oil resources, the unification of economic institutions and government subsidies.

Meanwhile, on the military side, Turkey’s intervention at the GNA’s urging that same month decisively shifted the tide in Tripoli’s favour.

The battlefield reversals have taken a toll on Haftar’s political influence both at home and abroad.

“Basically the contract expired and the situation there is such that they’re focused on more serious issues right now,” executive vice president Joseph Fleming said at the time.

Another firm indirectly supporting Haftar shut down its lobbying operations earlier this year after being raided by the FBI.

Bloomberg reported earlier this year that a confidential UN report had linked Opus Capital to the deployment of Western mercenaries helping Haftar.

In any event, Esposito has not disclosed any new lobbying since the FBI raided his home in early January, following reports that he greatly exaggerated his ties to the Trump administration to potential clients.

That has left the UAE’s lobbyists to pitch in on Libya policy on their own. On 22 June, Akin Gump lobbyist Hagir Elawad, a former head of legislative affairs for the UAE embassy in Washington, emailed her contacts to share the Emirati government’s warning that a conflict between Turkey and Egypt loomed on the horizon if the Turks did not pull back in Libya.

“Egypt will NOT allow a Muslim Brotherhood-supporting country to set up shop on its border,” she wrote. “That is an existential threat to them. That would be the equivalent of having China in place of Canada, and Russia in place of Mexico.”

The Libyan American Alliance’s Omeish countered that the Biden administration should instead embrace Ankara’s role as an agent of stability and a vital ally for countering Russian influence.

“If Biden wants to engage Nato more, if he wants to have more robust partners in the region to help him, I think Turkey should be considered a center-piece,” he said.

He said his group is already engaging with a Biden team that has proved open to listening to a wide variety of opinions on foreign-policy issues.

“That’s been a nice door-opener for us to engage them at a level where hopefully we can talk to folks who are going to be managing Libya policy,” Omeish said.

“I think that’s a great opportunity for think-tanks and advocacy groups to put their mark on Libya policy.”

The white paper the alliance is putting together aims to suggest a framework for actionable US policies over the next 100 days in conjunction with the UN process.

Among the group’s requests are a US commitment to the Berlin conference’s three tracks and a renewed push with incoming Department of Justice leaders for a criminal probe into Haftar’s alleged war crimes after the effort failed to gain much traction under Trump.

“We don’t want human rights violations and crimes to be relegated to a secondary position,” he said. As for congressional outreach, Omeish said that while the Libyan American Alliance welcomed last week’s passage of the Libya Stabilization Act, the group sees room for improvement if it comes up before the Senate or in next year’s Congress.

Among his group’s concerns are what he called the “false equivalence” created by listing Turkish military contractors alongside Russian mercenaries and Islamic State fighters among foreign armed groups and by treating attacks on civilian targets by GNA and LNA forces equally even though the latter are responsible for more of them, according to the UN panel of experts on Libya.

He also pointed out that the bill does not mention the Russia-focused Countering America’s Adversaries Through Sanctions Act in its list of punitive tools that could be used against destabilising actors in Libya.

“It’s definitely, I think, a good law that needs to come out,” Omeish said. “But it can be improved upon in many ways.”